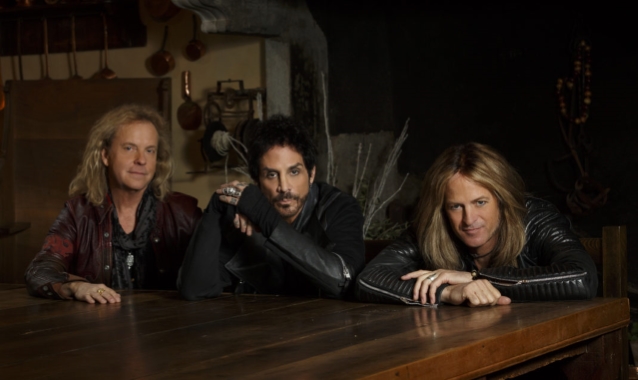 "Doug, Jack and I are gearing up for a new record with drum tracks being laid down end of March," Castronovo wrote on December 14.

REVOLUTION SAINTS was conceptualized by Frontiers Music Srl president Serafino Perugino, a longtime JOURNEY fan who wanted to find a vehicle for Castronovo — a long-established drummer who has performed with artists as varied as OZZY OSBOURNE, SOCIAL DISTORTION and BAD ENGLISH — to display his vocal prowess. The label released the group's self-titled debut album, which featured guest appearances by JOURNEY members Arnel Pineda and Neal Schon, in 2015.

In 2017, the group made their live debut (and to date, their sole concert performance) in Milan, Italy at the Frontiers Rock Festival IV. Later that year, they released their second album, "Light In The Dark", which — like their debut — was produced by Alessandro Del Vecchio (HARDLINE, JORN). Most of the album was recorded at Del Vecchio's studios in Somma Lombardo, Italy, with additional recording taking place at Blades's studio in Washington, Aldrich's CasaDala studio in Los Angeles and in other countries all over the world while Aldrich was on tour with THE DEAD DAISIES.