So you wanna be a rock 'n roll star, THE BYRDS once posited at the height of the turbulent Sixties. Well, how about being a rock 'n' roll tour manager?

Mark Workman, tour manager and lighting designer for some of heavy music's biggest names including TESTAMENT, MEGADETH, ANTHRAX, DIO, MACHINE HEAD, MUDVAYNE, QUEENS OF THE STONE AGE, SEVENDUST and many others, has released what might be the most revelatory manual in navigating the complex world of the music industry, "One For The Road: How To Be A Music Tour Manager".

Workman, also a boxing fanatic and writer for Fox Sports.com and BoxingScene.com, loads "One For The Road: How To Be A Music Tour Manager" with plenty of humor and just enough sordid recounts of road life that will entertain even those who have no interest in a music industry career. However, Workman has provided priceless insight with his book which should be studied top-to-bottom by anyone looking to make their living in the business.

Featuring an introduction by TESTAMENT guitarist Alex Skolnick (who affectionately refers to Workman as "Sergeant Slaughter"), "One For The Road: How To Be A Music Tour Manager" acts as a tutorial for the multifaceted aspects of tour managing which include how to get started, how to organize a concert tour, how to create and complete a tour budget, plus hire a solid road crew, book hotels and air travel the correct way. That's just the top-level view.

Workman states early on, "This book was so full of happy horseshit, you needed a manure collector get rid of it all. I made up my mind right then and there, to tell it like it is: the good, the bad, the ugly and the monstrously awful". Expect all of those, delivered candidly and well up to his namesake.

Mark Workman began his career in the music business as a lighting designer for STEELER then performed double duty as lighting designer and tour manager for LEATHERWOLF. He left West Virginia as a coal miner for Los Angeles with $150.00 in his pocket on the predication of breaking into the music racket. Upon his arrival to the West Coast, Workman got into porn distribution in Hollywood where he bootlegged some of the videos and found himself in hot water. Ron Keel then rescued Workman by offering him the opportunity to start a merchandising company for STEELER. Workman soon became the lighting designer for the band and his journey toward the dark side (as he jokingly refers) began.

Describing himself as a half full versus half empty person, Workman's book is filled with meticulous advice any pragmatic tour manager needs to be aware of, trailing down to such details as dealing with foreign artist tax, applying for overseas visas and work permits for the touring entourage, creating a tour book along with the vital information it should contain, coordinating trucking and air cargo, hiring sound and lighting systems for the show, understanding tour riders and contracts, preparing ATA carnets and equipment manifests, plus getting backdrops, scrims, plots, input charts and stage sets made.

Still only skimming the surface as to what a tour manager needs to know affluently, Mark Workman breaks down proper procedures for tour accounting, daily per diems (if the band has them, that is) reconciliations and nightly show settlements. He supplements these with example budget ledgers and he accounts for every little detail that could crop up on tour, including fuel, bus driver hotel layouts and overdrives, payroll taxes for the entire entourage, show supplies, shower rooms, show passes, Fedex fees and production (i.e. lights and sound) hauls.

Aside from the microeconomics involved to being a successful tour manager, Workman stresses the importance of communication with all branches from the record label reps and band managers to venue promoters and booking agents. Handling band press, meet-and-greets and in-store appearances from city-to-city is covered, as is the right way to deal with venue security, fielding sound and lighting rig issues and even contending with potential diva behavior by artists.

As dizzying as the seemingly infinite responsibilities of a tour manager may appear, Workman's sardonic wit keeps "One For The Road: How To Be A Music Tour Manager" fresh on top of informative. Of the many possible tour disasters Workman conveys in his book, one of the most colorful and nerve-wracking stories comes from a double drive (meaning two successive bus drive times for one trip) Workman did himself from Chicago to Saskatoon, Canada marred by bad winter conditions and a border processing from hell. Doing the drive for a friend who was tour managing for the first time, the entourage was detained at the Canadian border over a castaway hash pipe that hadn't been removed by the rookie T.M. Workman hilariously describes the drug ferreting dog as a "Canadian Cujo" and the story ends on a positive note, albeit barely. In the same chapter, Workman issues the caveat to anyone touring to never act like a "fool" or a "diva" at border stops.

As a brutally honest book, Workman's material about band guarantees (or show fees) paints the reality of profit generation from the band's perspective. New bands' salaries can expect to show zeros on a tour budget until they start turning a profit on the road and they can start paying themselves. Usually, a band's merch sales become their sole sustenance until they've cultivated a broad audience. Workman discusses "tour support", which is a loan from the record company used to subsidize a band's travel expenses and almost always have to be paid back, usually from royalties.

Workman urges tour managers to negotiate their personal salaries and tour advance fees with the band manager lest they find themselves waiting to get compensated. One fascinating observation he makes is how some supporting acts pay their headliner's sound engineers to do their sound each night on tour in order to save money, or how they establish rapport with the venue's sound engineer for assistance. In this light, Workman suggests an up-and-coming band gets a good road crew and bonds with their headliner's crew to open ties on the immediate leg and to network for future tours.

The later chapters talk about taking care of band clients, including the troublemakers. Workman counsels that tour managers need to "find out what makes them tick and what ticks them off". Furthermore, Workman passes along advice about handling the last day of a tour, i.e. expense receipts, road reports, squaring up with the bus driver before the last day, settling with the crew, accounting for per diems, adding final show settlements and printing out ledgers and final reconciliations. He also recommends tour managers avoid excessive Facebook posting from the road and that they "resist the urge to put moments of personal lunacy on the Internet".

If you think you have road life figured out and you don't have the same amount of miles clocked as Mark Workman, think again and read "One For The Road: How To Be A Music Tour Manager". 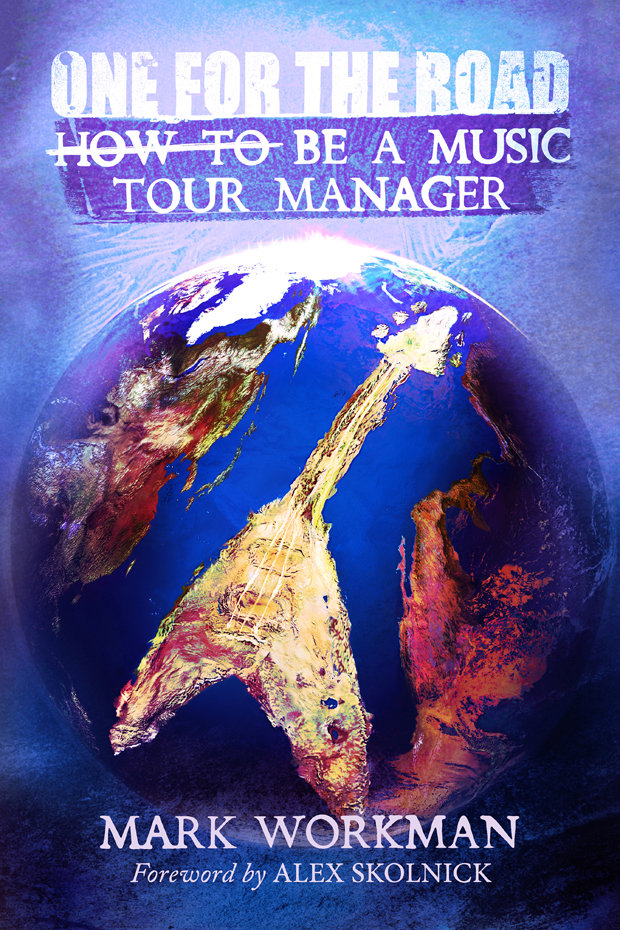