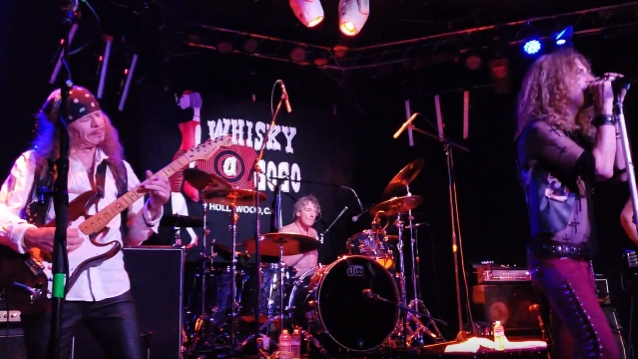 A revamped version of KINGDOM COME — comprised of guitarists Danny Stag and Rick Steier, bassist Johnny B. Frank, drummer James Kottak, along with singer Keith St. John (formerly of MONTROSE and LYNCH MOB) — is celebrating the 30th anniversary of the release of the band's self-titled debut album by embarking on a U.S. tour. Original singer Lenny Wolf declined to participate in the trek, which kicked off on September 27 at Club Sur Rocks in Seattle, Washington.

Fan-filmed video footage of KINGDOM COME's October 3 concert at the Whisky A Go Go in West Hollywood, California can be seen below.

Kottak, who played on KINGDOM COME's first two albums, 1988's "Kingdom Come" and 1989's "In Your Face" before leaving, spoke to "Rock Talk With Mitch Lafon" about his decision to resurrect the group. "I've been itching at this," he said. "We tried to launch it back in 2012-13; it just didn't happen because my duties with SCORPIONS took over. And here we are now. We've got the original four — me, myself, Danny Stag on guitar; Johnny B. Frank on bass; Rick Steier on guitar — and then introducing Keith St. John, the vocalist who sang for MONTROSE, LYNCH MOB, etc. And I'm so excited. It's gonna be so awesome."

Regarding Lenny's decision to sit out the tour, James said: "Lenny is just kind of Lenny. To know him is to love him, and I love him and respect his wishes. We've gone back and forth over the last five, six years about this KINGDOM COME reboot, but recently, back in November [or] December, I approached him and I gave him everything on a silver platter, but he said, 'You know what? I just don't wanna do it.' He's just kind of done. He wants to retire. He's got his life. He's up in Hamburg, Germany, and he just doesn't wanna deal with it. And I can understand that and I respect that.

"I had this desire to do this for so long, and he knew that — he knew this going into it, that I wanted to do it, and I'm not gonna let anything stop me," he continued. "So I'm taking it out — KINGDOM COME; it's my name — 'cause it was my band too. So we're out there, and Lenny gave us [his] blessing. I really wish he was onboard, [but] he's just not, and it is what it is. And you do what you have to do, and that's it. It's rock and roll, man."

Asked if the new KINGDOM COME will perform only cuts from the self-titled debut or if it will include other material in its set, Kottak said: "We're gonna play the entire first album, but also we're gonna include songs from the second album, and then also what we thought we would do is add in some MONTROSE, because me and Keith were both with MONTROSE. We're gonna add in some… a little bit of this, and maybe a WARRANT song, and maybe this song and that song, and a little bit of everything to keep it interesting. I mean, we're gonna play some LED ZEPPELIN. Are you kidding? GRETA VAN FLEET is killing it. And we wanna include everything, because we don't wanna be a one-dimensional band, like, 'Oh, it's KINGDOM COME, KINGDOM COME. We're playing the first album.' We wanna include everything, we wanna involve everybody and we wanna make it interesting, because, face it or not, people's attention spans have gotten very short. And we want to entertain everyone — in an hour and 15 minutes, we want to provide you with 24, 28 songs. Maybe it's not the complete songs, but you know what you're gonna get? You're gonna get a rock and roll extravaganza, [and] you're gonna get entertainment."

Kottak, who joined the SCORPIONS in 1996 and played with the band for 20 years, went on to say that he hopes KINGDOM COME can continue well beyond the U.S. tour. "For me, this is something I wanted to reboot years ago, but SCORPIONS didn't end," he said, referring to the German group's aborted farewell tour. "What I would like to see happen is we do this to reboot it and we get it up and running at the end of September through October, and then we keep going and going. And I would like to tour on it and I would create some new music, or some new singles — something. But I want it to continue on, because I love rock and roll, and I love KINGDOM COME. And maybe Lenny will contribute some music towards it… I just want things to go forward — I want things to be big. Because if the music isn't there, I'm not there, man."

"I love rock and roll and I like good rock and roll, and KINGDOM COME, to me, is the best of the best. So let's see what happens, man."

Keith St. John also made an appearance on "Rock Talk With Mitch Lafon" to address his involvement with the revamped KINGDOM COME. The singer, who has known Kottak for more than two decades, said that he decided to front the project after careful consideration over a year-long period.

"As a vocalist, when you're gonna go out and either sub in or become the new guy in a band that's been seen and is kind of iconic and especially that had a lot of video exposure, it's a big decision for me, as a singer, because the vocalist is hard to miss, and especially for the fans — it's hard to miss that there's a different vocalist when people come out to see a band," he explained. "So I'm really careful about picking and choosing what I'll do. And suffice it to say, living in L.A. and being a guy that most of the, let's say, '80s, hair-band kind of genre knows about, I get called to do this kind of thing. And for me, my basic philosophy, as I've been getting middle-aged, or whatever you wanna call it — a little older — has been, if I can't be me and just do my thing and have it just fit in with the style of the band, then I really have to pass these days.

"The KINGDOM COME thing came about out of the blue, when James and I were talking, probably close to a year ago," he continued. "And I listened to the material and I thought about it, and I was, like, 'Man, this stuff really could be done in a way… I mean, I can sing this my way and it'll still sound authentic, like it's supposed to sound, and I can have a lot of fun with this stuff.' And as also part of my due diligence, I said to myself, 'Well, you guys [have] really gotta make sure that you wanna do this, because, by and large, for me' — I always tell this to bands, and I'm sure everybody else feels the same way — 'if the original guys are alive and you can get together, get together, man. Do it. Because there's only so much time.' But, for whatever reason, this is something that probably has to remain the way it is, as far as Lenny doing his own thing and the band doing its own thing. And that's cool — they spent a lot of time working it out. So I waited until they did their diligence and they were really sure. A bunch of months went by — like a half a year — and we said, 'Are you sure? Are you sure? Okay.' And we said, 'Okay, let's go for it, man. [We've] got a month or more worth of dates in the fall. Let's try it out. Let's start it there, see how it goes.' And we're either gonna have a really big super-win or we're gonna have a whole bunch of angry fans going, 'Thumbs down.' [Laughs]"

This past June, Wolf issued a statement via his official web site in which he said that "the KINGDOM COME ship has reached its final destination, at least during my visit on our planet earth." He added that his decision was "mainly caused by experiences I made throughout the last three years, during which the fun factor disappeared more and more, and our energy and hopes have repeatedly been crushed by people and circumstances beyond our control. Some folks out there may not believe it, but it's NOT all about money," he said. "I realized that chasing something which seems is not meant to be, trying to force things, would never lead to something good. Therefore it's time to let go.

"It's been a fantastic 30-year-long musical ride, for which I can only be VERY grateful," the singer added. "Having gone through good and bad times, in the end it was an exceptional way to explore our planet, having met countless wonderful people around the globe and building up memories that can not be taken away from me, or you.

"I'm not saying that I will never write a song again, or never again enter a stage, but the chapter called 'KINGDOM COME' is now closed. One day I may revisit the music scene with a new band called 'IRON BANANA', but until then, it is what it is.

"I hope the KINGDOM COME songs have given many of you energy, joy and strength, as they did for me," Lenny said. "The KINGDOM COME songs will live on, long after we all have turned to dust, and will hopefully do the same for many generations to come, unless of course, we have blown up our planet before then." 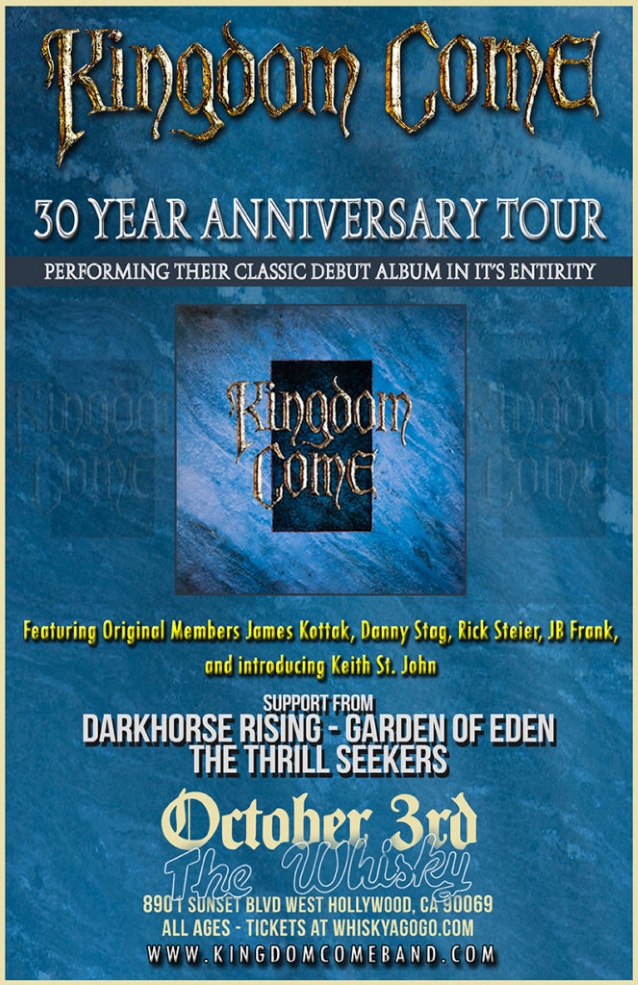