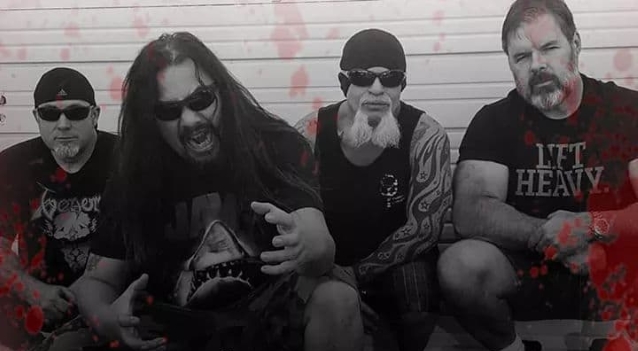 Resurrected Florida death metal veterans MASSACRE have been added to the roster of U.K.'s United Talent Agency, under the representation of Ben Ward for all territories (excluding North America).

The current lineup of the band features three-fourths of the original team that is responsible for the classic death metal material that became the album "From Beyond" — Kam Lee on vocals, Rick Rozz on guitar and Michael Borders on bass — along with drummer Mike Mazzonetto, who has been the drummer and vital member of MASSACRE for the last nine years. The newly reunited lineup has recently played shows in Florida, Germany and Texas, with several U.S. and South American dates rounding out the remainder of the year, including California Death Fest at the end of July.

Back in December 2016, Lee and Rozz — after trading verbal barbs and taunts for many years — announced that they were rejoining forces in a revamped version of MASSACRE, dubbed MASSACRE X (the "X" was said to represent the band's tenth lineup). Within a couple of days of Lee and Rozz's announcement, former MASSACRE drummer Bill Andrews — who moved to Japan in the early 1990s — released a statement saying that he did not approve of this latest attempt to reform MASSACRE and threatened legal action if Rozz and Lee moved forward with their plans. Rozz and Lee later changed the name of the group to GODS OF DEATH, but eventually went back to using the MASSACRE moniker.

Prior to Lee and Rozz's current reunion, MASSACRE's most recent incarnation included Rozz and Mazzonetto alongside bassist Terry Butler and vocalist Ed Webb. That lineup lasted for four years and released a critically acclaimed album, 2014's "Back From Beyond", via Century Media Records.

In early 2017, Butler — who is now playing bass for OBITUARY — told Metal Wani that Rozz and Mazzonetto "destroyed" MASSACRE with their "behind-the-scenes backtalking and backstabbing." He went on to make it clear that Rozz and Lee's new band "cannot be called MASSACRE." He said: "They can do all they want and write all the songs in the world they want, but it's not gonna be called MASSACRE."