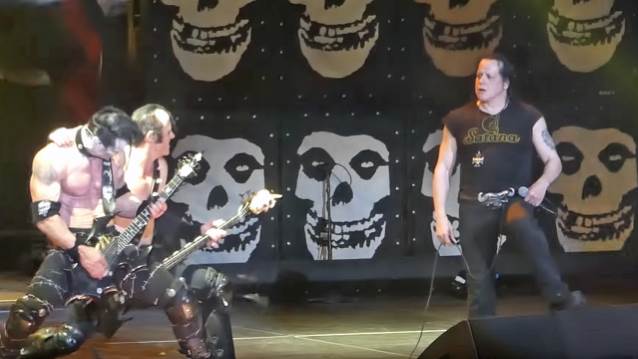 The classic-era lineup of the horror punk outfit MISFITS — Glenn Danzig, Jerry Only and Doyle Wolfgang Von Frankenstein — played its first show in New Jersey in 35 years on Saturday, May 19 at the Prudential Center in Newark. Fan-filmed video footage of the performance can be seen below.

MISFITS played two historic reunion concerts in 2016 at Riot Fest in Denver and Chicago that drew rabid fans in droves from all over the world and shattered attendance records at the festivals. More recently, MISFITS played two reunion shows at the end of December in Los Angeles and in Las Vegas.

After years of bad blood, Glenn reunited with Only and Wolfgang Von Frankenstein for the Riot Fest concerts. Prior to those gigs, the trio last performed together on October 29, 1983.

Only told Rolling Stone in September 2016 that he wanted the MISFITS reunion to continue. "I know Doyle wants it to continue. I know Glenn wants it to continue," he said. "We just have to be big enough people to make it continue. And that's where we're at. Whatever it takes. We're going into our 40th anniversary, so the timing couldn't be more perfect."