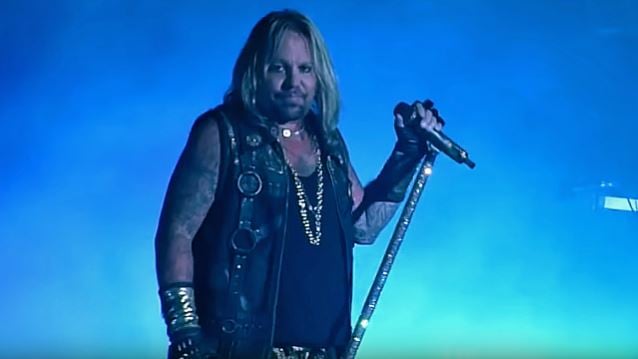 According to TMZ, MÖTLEY CRÜE singer Vince Neil was captured on surveillance footage last week dragging an autograph seeker to the ground by her hair before being cited for battery.

Neil claimed he only "pushed past" a female autograph seeker at the Aria in Las Vegas on April 7, but officers concluded after reviewing the video that the singer did in fact pull the woman by her hair.

The woman says that she was left stunned, and suffered a sore neck as well as pain in her lower back and hip.

As for the scene outside the hotel, which was captured on video and posted by TMZ (see below), cops say Neil was actually trying to fight another individual, while Cage tried to play peacemaker. The clip was reportedly filmed after Vince was held for an hour by security and police had already ticketed the singer for battery.

The singer's attorney, David Chesnoff, told the Daily News he is still investigating the incident.

"All I've seen is that there was an allegation of a simple misdemeanor battery," he said. "People shouldn't pre-judge things until all the facts are in."