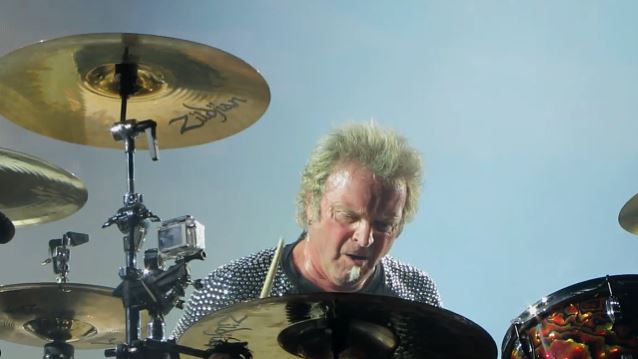 Due to illness, AEROSMITH has been forced to cancel tonight's (Wednesday, August 13) performance at the Concord Pavilion in Concord, California. The band regrets not being able to perform for its fans. Refunds will be available at point of purchase.

According to TMZ.com, AEROSMITH drummer Joey Kramer experienced heart complications Tuesday and the band plans to cancel its next show in Washington on Saturday (August 16) as well.

A source close to the band told the site the 64-year-old musician will undergo heart surgery, although this has not been confirmed. The drummer has reportedly had previous issues with his heart.

A couple of weeks ago, Kramer gave an interview to Smashing Interviews magazine in which he stated about how he prepares for the rigors of the touring lifestyle: "I'm in the gym every day on off days, and I just make sure I eat right and sleep right. That pretty much takes care of it. After doing it as many years as we've done it, it comes as second nature, so you just have to take care of what comes naturally."