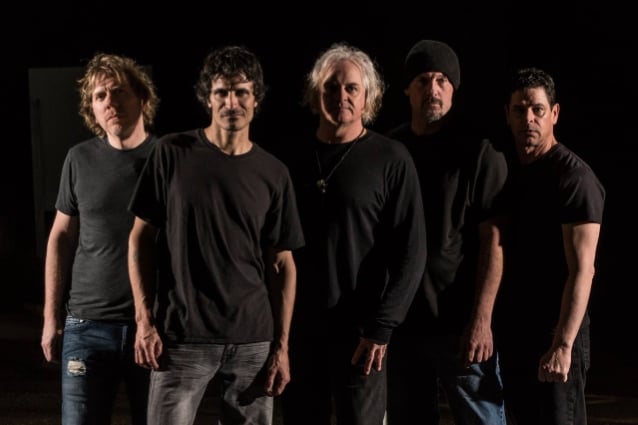 Reformed '90s Madison, Wisconsin alternative hard rockers LAST CRACK have signed to EMP Label Group, the U.S.-based label of MEGADETH bassist David Ellefson. The band's long-awaited third full-length album, "The Up Rising", will be released on May 31. Recorded during 2017-2019 at Megatone Studios in Madison, the LP will be the band's first studio release since 1991's critically acclaimed "Burning Time".

Formed in 1987, LAST CRACK recorded its first five-song demo and was brought to the attention of legendary Roadrunner A&R man Monte Conner, who signed the band and sent them off to Prince's Paisley Park to begin work on their 1989 Roadrunner debut, "Sinister Funkhouse #17".

The album, aptly named after their practice/storage unit they rented outside of Madison. Dedicating hours of playing in a hot, sweaty garage with vocalist Buddo scribbling lyrics on the walls, the original lineup of Buddo, Don Bakken and Paul Schluter on guitars, Todd Winger on bass, and Phil Buerstatte on drums, LAST CRACK was more than ready to unleash its heavy/quirky sound and visions to the world

With the release of "Funkhouse", LAST CRACK got the attention of the major metal magazines, and quickly developed a loyal fan base.

Their sophomore effort, "Burning Time", was recorded at Eldorado Studios in Hollywood with Dave Jerden, famed for recording iconic albums with JANE'S ADDICTION and ALICE IN CHAINS. The LP was met with critical acclaim and the band embarked on a tour of the U.S. and Europe.

EMP's Thom Hazaert commented: "Growing up in Wisconsin, LAST CRACK coming out of Madison was such a huge deal. I remember 'Burning Time' coming out, and it was like dynamite. They were really doing something that no one else was doing at the time. All the 'cool' kids loved them. They were always a band that was so ahead of their time, and it's a huge honor to release the follow-up to 'Burning Time', all these years later. Hopefully the world finally caught up."

Fueled by conflicts and industry pressures the band broke up just months after the "Burning Time" tour had begun, leaving all wondering what happened. Buerstatte would go on to play drums for WHITE ZOMBIE, while Buddo, Paul, Don and Todd all continued performing in several popular regional bands in Wisconsin.

In 2002, the band reunited with the original members, except for Buerstatte, who was replaced by Chris Havey. After releasing a live album with songs from both studio albums, LAST CRACK toured Iceland and the Netherlands, enjoying firsthand that they still had fans around the world. All five original band members were brought back together in November of 2009 for one date in Wisconsin. This would be the last time, as Buerstatte passed away in 2013.