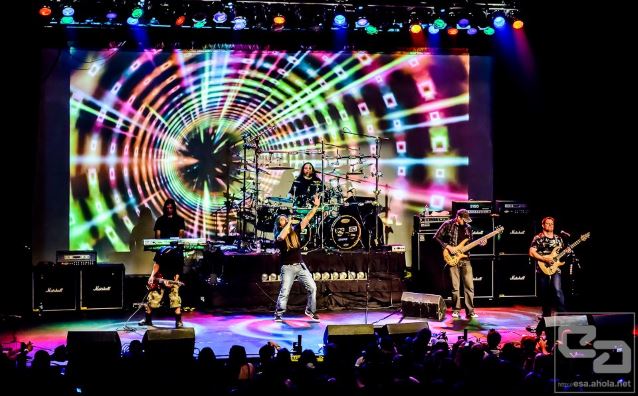 REDEMPTION, the U.S. progressive metal band featuring in its ranks guitarist/songwriter Nick Van Dyk and legendary FATES WARNING vocalist Ray Alder, has completed recording a new album, due laer in the year via Metal Blade Records. The band's current lineup is rounded out by bassist Sean Andrews, drummer Chris Quirarte and guitarist Bernie Versailles, who is presently on a medical leave of absence from REDEMPTION.

Nick Van Dyk comments on signing with Metal Blade: "We are incredibly fired up to join the Metal Blade family. Brian [Slagel] and his team have been friends for years and many of them have been supporters of the band from early days, and the influence of Brian and his label on the history of heavy music is indelible. We're working with friends who are passionate about the music and who are some of the best in the world at what they do. REDEMPTION is really excited about our collaborations to come!"

With the new record, redemption is returning from a longer than usual break. Van Dyk explains: "We've taken the longest break between records in our history, for a number of reasons. But we are excited to return with what I honestly believe may represent the best record thus far in our career. We are just putting the finishing touches on it now. The songs are unmistakably REDEMPTION, with the combination of energy, urgency, melody and heaviness that marks all of our work. But the songwriting and performances have been taken up a notch across the board. The music ranges from short, hard-hitting power/prog to sprawling epics, including the longest song we've ever recorded with Ray on vocals. The album is being mixed as we speak and we're very excited for our fans to hear it!"

Finally, Van Dyk has issued the following update on the status of Bernie Versailles: "This is also the first record we have done without the involvement of our dear friend and bandmate Bernie Versailles, who is recovering from the aneurysm he suffered last October. We are thrilled with his progress but his road to recovery is going to be a long one. After numerous conversations with Bernie, his family and close friends, we have collectively decided that Bernie's recovery should be directed by what is needed to fully restore his physical well being, not by the needs of this band. Bernie is a founding member of this band and his place will be kept for him while he is on extended medical leave. We have been fortunate to have a tremendous guitarist step in, as well as a couple of other special guests. I look forward to announcing these guests in the coming weeks as the album is finalized. The guitar playing on this record is insane — and I think fans of a particular band are going to have their mind absolutely blown and can't wait for the big reveal!"