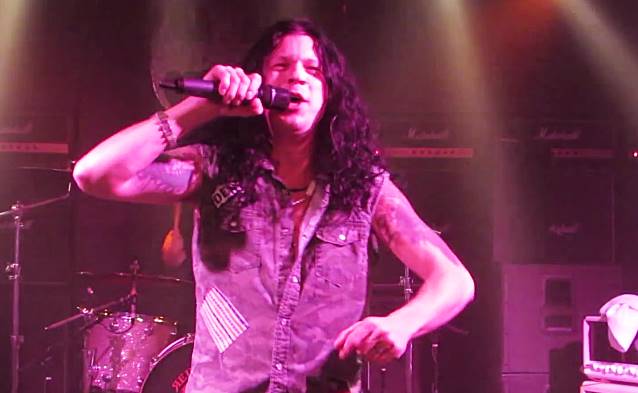 Sleaze Roxx: You have to be the envy of a lot of lead vocalists out there since you landed the gig in Jake E. Lee's RED DRAGON CARTEL. What was the audition process like for you?

Smith: It was a long one, actually. I mean, they asked me, basically, to help write some stuff and they were sending me stuff. I did that for, like, seven months, not ever once thinking this was my gig. I like to write and I like to write with people who know how to write, so it was a long experience. I never really thought — or knew — I had the gig until I actually went to [Las] Vegas and rehearsed for a week. During that week of rehearsal, we basically just had some drinks together. We jammed with all kinds of other rock stars that would show up and hang out with us from all over Vegas. I was leaving to come home and I just said, "Jake, do I get the gig?", and he took his sweet time answering and then he goes, "Awww, you always had the gig." Envy? Yeah, I guess it would explain all the haters on the Internet. I have been doing this a long time. I have been making records since I was 15 years old — playing drums with a punk band to where I am now, which is 48. So it has been a long ride and I have made a lot of records with a lot of bands. I am really happy that I have got this opportunity to play with one of the greats — but at the end of the day, I wish I was 20 years younger.

Sleaze Roxx: Now, obviously we are going to talk a little bit about RED DRAGON CARTEL's first show. You had a tough first outing doing at the Whisky A Go Go. What struck me the most was that Jake E. Lee really went to bat for you publicly and tried to shoulder the blame for whatever happened. What are your thoughts, two months later, on that performance and the aftermath from it?

Smith: Well, I think the aftermath was really blown out of proportion. Everybody was basically judging me from iPhone recordings. Yeah, I had a few drinks. I mean, I am playing the Whisky with four nights' rehearsal with Jake E. Lee — and me and him were drinking, you know? I mean, worst-case scenario — a guy in a rock and roll band got drunk on stage — OHHHHHH! That's heavy! You know? Give me a break! I just thought everybody should really — I don't know. To me, it was just ridiculous, you know? I mean, it was not as bad as everybody says. All these couch critics, critiquing me with all their expertise — I just found it really humorous. I was at that show. There was nobody giving me the finger. There was nobody yelling, "You suck!" It was a complete audience getting into the show and rocking it. Afterwards, there were no weird vibes. I know it was not an ace show. I mean we had four nights' rehearsal before we did that show. The reason why Jake decided to take the blame upon himself — which also shocked me, by the way — was he said he should never have put our first show with such a stigma as the Whisky with four days' rehearsal. We should have been playing a tour that ended up there, but that was our first show. I mean, we still are figuring out each other, you know? He had not played in so long that he just forgot all the details it takes to put a band out there — a brand new band out there. And that is kind of the reason why he took the blame. There was no weird feeling at the Whisky that night. There was nobody going, "OHHHH. You guys sucked." There was none of that so to wake up in the morning and see all these haters. I mean, to me, it is just, like, really? That is like me going on the Internet and critiquing some operation a guy had that I know nothing about, you know? I am not a doctor, so I think a lot of the people just talk out of their asses most of the time. But at the end of the day, that is what the Internet has given us — freedom of speech that probably should be shut down!

Sleaze Roxx: I was listening to one of your prior interviews and it seems that you are really hoping to make your mark, or go to the next level, as the lead singer of RED DRAGON CARTEL. Would you agree?

Smith: Well, yeah. I mean anything I do in music, I hope to strive to achieve a longer more fulfilling career. All that I am concerned with is the band that I am with, that we are happy and content as a unit, as a band — that we like to play together and the songs we write make us happy. Because I have been in the business long enough to know that you cannot please everybody. There are people that go, "OHHH. I hate this!" and the very next line is, "This is the best song ever!" So, how do you stop that? You don't. You just basically make a record that you are proud of as an individual and be proud that your band likes it too — just put out product that you enjoy. I mean, at the end of the day, the audience is not even there. When you are writing this stuff, we are not sitting there going, "I wonder if the audience will like this?" They are not even there. We are writing this going, "Yeah, I like this. You like this? Awesome! What about you? What about you?" —and that includes a producer. You are writing the record for yourself and when people like it, that is just a bonus! But at the end of the day, we already did the record. It is done, you know what I mean?

Sleaze Roxx: Obviously, Ozzy Osbourne and Ray Gillen [BADLANDS] have very different vocal styles. Which ones are the harder songs for you to sing?

Smith: Well, Ray Gillen is — it is way up there, it is a much cleaner voice. Ozzy, it is a much milder, more monotone melodic structure. Not always, but more so than a Ray Gillen. I think playing in cover bands and stuff like I did around my home when I was not touring with the original recording guys kind of prepared me for the diversity of what I would have to do. It feels weird to be singing full out, pretty much yelling, and then pull it back and sing the other soulful blues rock — but I love the challenge. And ever since the first show, I do not drink at all anymore because it is not second nature right now. It is still a new band. I hope to drink a whole lot later in the show. [Laughs] I mean, don't forget that for that first show, I did not even have time to be nervous because I was so distracted by the paparazzi, the fans, all that and the socializing. But let's not talk about that shit anymore.