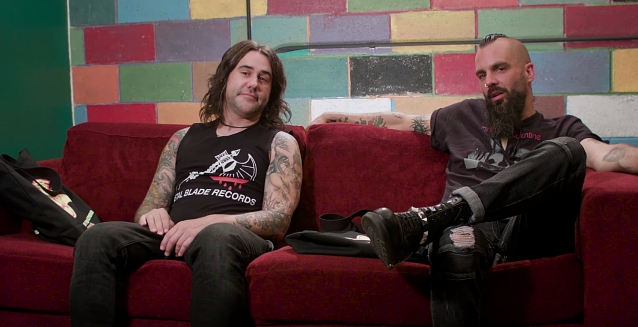 Mike D'Antonio and Jesse Leach of KILLSWITCH ENGAGE are featured in Amoeba Music's "What's In My Bag?" segment in which they talk about some of the records they are into. In the clip below, they can be seen shopping at Amoeba in Hollywood, where they pick up music by AGNOSTIC FRONT, CARCASS, BAD BRAINS, DEAD KENNEDYS and MEGADETH, among others.

"Atonement" is the culmination of a trying and turbulent two-year period. KILLSWITCH ENGAGE started kicking around ideas for the album as early as 2017. The band recorded the bulk of the material separately on both coasts. However, in the middle of the process, a polyp developed scar tissue in Leach's throat, forcing him to undergo surgery. The intense three-month recovery ended with speech therapy, vocal therapy, and scream therapy. The band ultimately emerged with an album that is further evidence of their undeniable legacy as one of the most enduring metal bands of the last two decades and beyond.

The elaborate illustration on the "Atonement" album cover was created by none other than talented U.K.-based artist Richey Beckett (METALLICA, MASTODON) with the band's own D'Antonio handling art direction and layout duties.