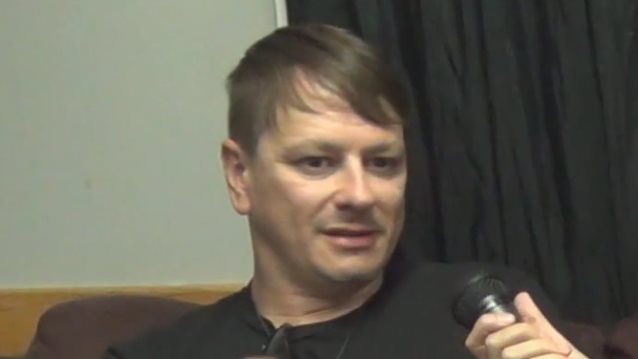 Rock journalist Lucas H. Gordon recently conducted an interview with KORN drummer Ray Luzier. You can now watch the chat below. A couple of excerpts follow (transcribed by BLABBERMOUTH.NET).

On KORN's upcoming album, "The Serenity Of Suffering":

Ray: "Everyone's gonna be blown away [by] this. It's my favorite record in the last ten years, easily. We had producer Nick Raskulinecz come in, and everyone knows his track record from FOO FIGHTERS, ALICE IN CHAINS, DEFTONES… on and on. He has a way of making the band really feel like the band's supposed to feel. And he really, really did a great job.

On "The Serenity Of Suffering" cover art:

Ray: "It's got that old-school flavor on the cover. If you notice, the kid dragging the doll… It takes you kind of back to old school. And I think that's what we wanted to do on this record — bring back the vibe and the brutality of what KORN's all about, but we also wanted to keep it up to date. We don't wanna just make a nostalgic record; anyone can do that. We thought it would be a little bit more challenging to make it more modern sounding, but yet have the intensity and feel that KORN has always been about. So, to me, that cover of the boy dragging… You see several different identities on the record of past surfacing through life. So you see little flavors of, like, maybe something disturbing, maybe something beautiful, maybe something happy, something sad. 'The Serenity Of Suffering'… Just what that means — all the elements of life. We all have our sufferings we go through, we all have our super-happy times. And at the end of the day, to me, music takes you away from all that. So I think this record's really gonna blow some minds."

On how KORN avoids repetition when it comes to songwriting:

Ray: "The thing is, we're still fans of music. We go out to see concerts all the time. And I'm a huge fan of AC/DC and IRON MAIDEN. But when you get a new IRON MAIDEN record, you pretty much know what it's gonna sound like, because that's their formula, they stick with it, and that's great. What I love about KORN, especially with Jonathan [Davis, KORN singer], is he's not afraid to go over here and over there and branch out and grow musically, because it keeps us on our toes. We did a full-blown dubstep-metal record a couple of years ago. So when you start doing things like that, you get to the point where you don't wanna keep repeating yourself. To me, at the end of the day, KORN's gonna sound like KORN. If we did a country record, it's gonna sound like KORN. Jonathan's got one of the most identifiable voices. No one plays like Munky or Head, and no one slaps a bass like Fieldy. And it's taken me many, many years, and I finally got my groove. We just have this strong force now that it sounds like us no matter what we do. So I think all the elements of KORN are in this new record."

On whether he feels like a full-fledged member of KORN after being in the band for almost ten years:

Ray: "It's funny. I was talking with Neil Peart from RUSH, and he was talking about the 'new guy' thing. And he goes, 'Ray, I've been in RUSH for thirty-plus years, and I'm still the new guy,' 'cause he's not the original drummer. My whole thing is, the band's gonna live on no matter what. The old drummer in this band quit; he decided to leave the fans. A lot of fans forget… And I'm a fan of music. I don't wanna see a new guy in ALICE IN CHAINS, I don't wanna see a new singer in JOURNEY. But these guys are the ones keeping these bands alive. So I'm that guy. If it wasn't me, it would be somebody else. Somebody else is gonna keep this band alive. I'm not saying I'm a hundred percent the drummer for KORN. But it worked out; they wanted me in the band. We had chemistry musically, and we had chemistry as people. And we're just getting stronger and stronger every tour. But I understand that a lot of diehard fans are, like, 'Who's that guy? Who's this Ray guy?' But after so many years, it's weird how much you just become blood brothers and it's just this… You get on stage and you take the deck and it's just this force. You can't control it. It's just a musical thing. But I feel really, really comfortable and confident now — in the past four or five years. The first couple of years were a little bit, like, 'Oh, I've gotta find my niche and my identity.' But I've definitely… This record shows, a hundred percent."