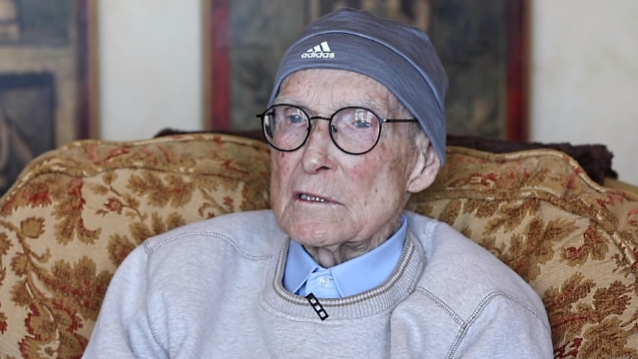 Ray Burton, father of the late METALLICA bassist Cliff Burton, passed away on Wednesday, January 15 at the age of 94.

Ray's death was confirmed by his daughter — and Cliff's sister — Connie, who wrote in a social media post earlier today: "To let you all know that my Dad died last Wednesday. Rest in peace Dad."

Cliff joined METALLICA in 1982 and performed on the band's first three studio albums: "Kill 'Em All", "Ride The Lightning" and "Master Of Puppets". He also received a posthumous writing credit for the song "To Live Is to Die" from the band's fourth studio album, "...And Justice For All" and was inducted into the Rock And Roll Hall Of Fame as a member of METALLICA on April 4, 2009.

In a 2017 interview, Ray Burton revealed that he was using his son's royalty checks to fund high school music scholarships. He told Alphabetallica: "One of the things from the royalties that I get, I give a scholarship to the high school he went to, Castro Valley High School, for music. The kids who won it they invariably write and thank me for. And I think Cliff probably would have done that with his money, because he was not against education by any means. He liked it very much."

Ray said that wealth didn't change Cliff. "He was quite a humble person," he said. "He just didn't like the strutting types that so much of the rock 'n' roll musicians get to be when they get popular. He just liked to do his wild playing of heavy metal music. He never changed."

Cliff's interest in music began at a young age when his father introduced him to classical music, guitar and bass. Cliff had a strong interest in rock, classical and eventually heavy metal. Cliff began playing the bass at age 13, following the death of his older brother, Scott and practiced up to six hours per day (even after he joined METALLICA). Along with classical and jazz, Cliff's other early influences varied from southern rock, country and the blues. Burton often cited Geddy Lee, Geezer Butler, Stanley Clarke, Lemmy Kilmister, Ed King and Phil Lynott as key influences on his style of bass playing.

"Cliff knew what he wanted to do and went out and did it," Ray told Mark Agnesi, Gibson's director of brand experience, in a June 2019 interview. "How could you not support a child who has that initiative already in their system and wanting to learn an occupation like that? The way he pursued music and the enthusiasm he showed toward the playing, we thought, 'well, let's see what happens.' Then when he came and said, 'Can you support me for five years?' not long after that, it was absolute history."

Back in 2016, the members of METALLICA reflected on their late bassist and talked about Ray Burton in a promotional video for "Metallica: Back To The Front", the definitive story of METALLICA's classic 1986 album "Master Of Puppets" and the tour that followed its release,.

"I still miss Cliff, no doubt, and I'd love to see him again at some point," METALLICA frontman James Hetfield said. "So seeing photos that I haven't seen before, especially where we're together, that is awesome. To get another piece of him back into my heart is great."

"[Ray Burton] is a great human being, and, obviously, the fact that he's Cliff Burton's dad is another reason we love having him around," METALLICA drummer Lars Ulrich said. "But that's not the primary reason.

"Ray has weathered all of these experiences with a smile on his face, and whenever he walks into a room at a METALLICA backstage or here at [the METALLICA headquarters] or any other place that we're fortunate enough to see him, he always has this incredible positive energy."

Added Hetfield: "When I grow up, I wanna be Ray Burton. [Laughs] He is so inspiring. His energy, his love of life, it's very attractive to me, 'cause I'm the other side of the battery most of the time. But he brings a smile to my face. I just look at him and I start smiling."

To let you all know that my Dad died last Wednesday. Rest in peace ?❣️? Dad.


Happy Holidays from the Burton Family!