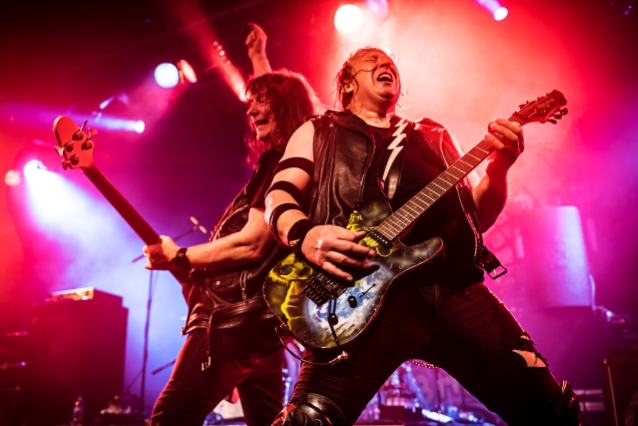 John Gallagher, the bassist/vocalist of British/American heavy metal veterans RAVEN, recently spoke with Josh Rundquist of That Drummer Guy. The full conversation can be streamed below. A few excerpts follow (as transcribed by BLABBERMOUTH.NET).

On the group's new live album, "Screaming Murder Death From Above: Live In Aalborg":

John: "We didn't plan on doing this, but sometimes you plan things out meticulously and they all go to hell, and other times, things just happen with a life of their own. This is certainly one of those times. We were having difficulties with a studio album — [we were] bouncing from studio to studio and had to get a few things fixed, and the record company were, like, 'Well, we don't want to put it out right now,' because it wasn't going to be ready, [and], 'It's not going to come out until the end of the year.' We're like, 'What are we going to do at the end of 2018? It's been so long; we want something out — for the fans, and also to go out and tour.' We can't just tour in a vacuum, as it were. This album is the perfect bridge between the last studio album and the new one, because it shows where we are; it shows the change in the band now that we've got Mike Heller in on drums; and it just really bridges from the past to the future. It's pure luck — we didn't even know it was being recorded. We were on tour with DIRKSCHNEIDER as special guests over in Europe, so we were in Denmark. We played the show, [and] the sound man came up to Mike after the show and said, 'Here — here's a memory stick. I recorded the show.' He said, 'Oh, great.' [He] didn't have anything to listen on, so he just put it in his pocket and went [about] his case. Six months later, we're, like, 'Do we have anything live? We could maybe put an EP out or something.' He digs around and plays this thing and gets blown away and says, 'You've got to hear this. This is a live album.' The only thing that needed fixing was, I'd broken a string on the second song, which never happens on bass. I never break strings, but I broke a string. I run over and [had] my wireless headset, so I'm still singing; change my bass; and there's five seconds of dead air where there's no bass guitar. That's the only thing we had to fix — everything else is au naturel. It's the way it was, warts and all. It's real, and that's why it works... It's a band out on stage trying to win over an audience, and we do. It's a place we'd never played before with people who had never seen us before, and you kind of get that. It's just us whittling them down bit by bit and winning them over. That's the fun part about doing an opening slot with just about anyone — you're up on trial [and] you have to deliver. There's no just waltzing on — 'Hey, everyone loves us.' We never treat it like that, ever, whether it's headlining or opening, but when it's opening like that and you've never played to a crowd before, you've got to go out there and show your worth. You want to prove yourself. It's a challenge we relish."

On the importance of being well-rehearsed:

John: "These days, you can't do [a show] without it ending up on YouTube anyways, so a lot of acts' trepidation you used to feel back in the day when it was like, 'This is going to be recorded live. Oh my god — I have to get it right,' when you've been doing it as long as we have, that kind of wears off a bit. Literally, we had no idea this was being recorded, so this was certainly no performance issues... to us, it was just another great show, and a great tour. We've been playing shows that good and better through the whole tour, and through every tour we've been doing since then. It's just a great document of where we are."

On his reluctance to release a live DVD:

John: "There's no video of this. I keep getting people asking, 'Was this videoed?' I'm ambivalent about doing a live DVD, because it's kind of [been] done to death. I really want people to come see us live. I think it's a much better experience than sticking a bit of plastic in and getting bamboozled by 5,000 camera changes. 'Let's do a million cuts to make it look exciting.' You can have a static camera on us and it will look pretty exciting. I don't know — we may do it at some point, just simply because we've never really done it... but to really see what we're all about, you've got to come and see us live."

On still being passionate about touring:

John: "We love what we do. If we didn't, we wouldn't be doing it. If this was a job, you'd probably walk away and quit after about three or four days. It's that hour-and-a-half, two-hour window whether you're on stage or around it, that's what's important, and everything else just leads up to that. Sometimes, there's ridiculous amounts of travel. We've done shows where there's almost no sleep — you pack up and you've got a 12 [or] 14-hour drive to the next show. We just pull over and grab an hour's worth [of sleep], because it's physically impossible to say, 'Okay, we'll go to a hotel for six hours, and then we'll get up.' You've got to make the show. We've done that, and we've done it back-to-back, which gets dangerous. Thank God you've got enough people to share the driving. [Laughs] It can get a little hairy, and it's not recommended, but we do what we've got to do. If we didn't like it, we wouldn't be doing it – and we enjoy the hell out of it... We realize how incredibly lucky we are. So many people in the States don't get to see any of [the country's scenery]. I think I've been to, even if it's just driving through, every state except for Hawaii and Alaska, and we've played in probably almost every state... The bucket list is getting a lot of ticks at the minute. It's good."

On staying young at heart:

John: "We've kind of been around the block. It was pointed out that this year was our 45th anniversary as a band. That's kind of impossible to get your head around, because with the majority of things that go on in your brain, you still think you're 14 or 15 years old. I mean, when you wake up the morning after a show and you need a bottle of Advil to get off the bed, maybe you realize it then occasionally, but other than that, we're in good shape and we still deliver. We're not a pale imitation of what we ever were. In many ways, we're better — we're as energetic; we play better; we have a better communication within the band, as far as like an ESP thing going on. It's strength to strength, and it's an incredibly fortunate place to be. We will make the most of our opportunities."

On the group's in-progress new album:

"Screaming Murder Death From Above: Live In Aalborg" will be released through SPV/Steamhammer on January 18 as CD digipak, 2LP gatefold, download and stream. 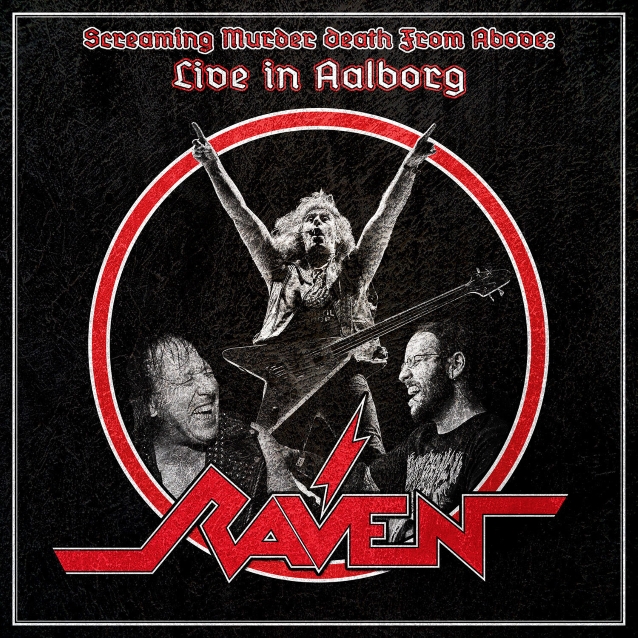 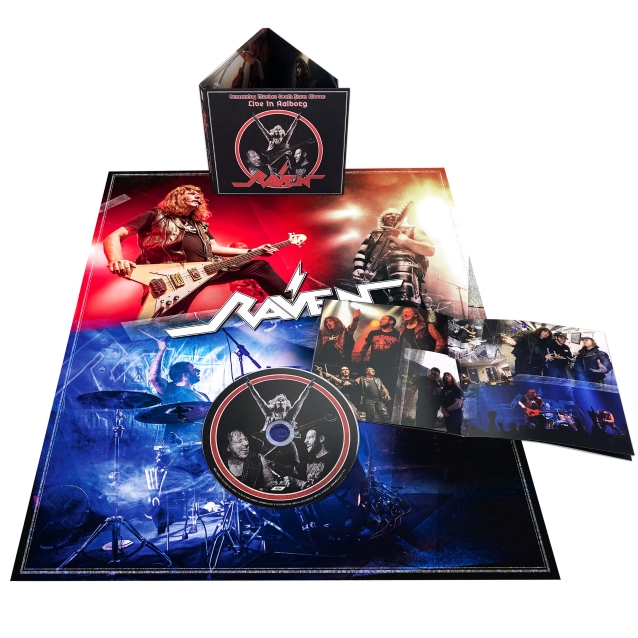 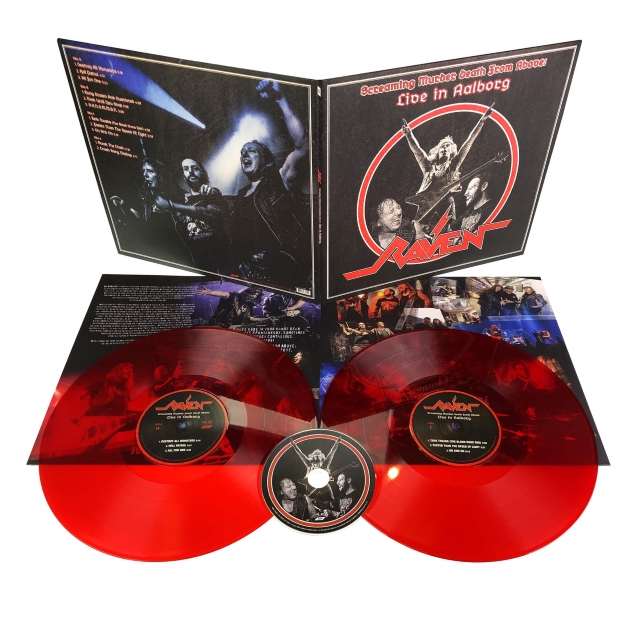