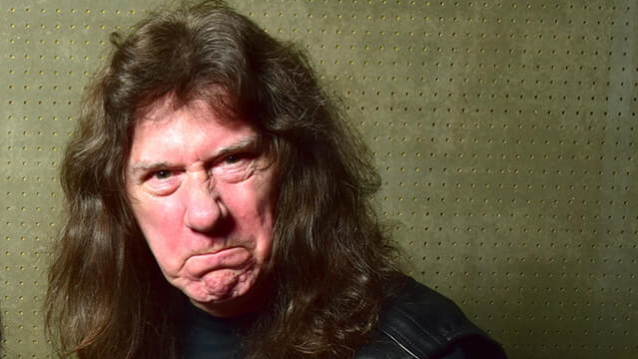 Matt Coe of Dead Rhetoric recently conducted an interview with bassist/vocalist John Gallagher of British/American trio RAVEN. A few excerpts from the chat follow below.

Dead Rhetoric: "Metal City" is the latest RAVEN album and first with drummer Mike Heller. What was the game plan in following up "ExtermiNation"? Did you enjoy having such a powerhouse drummer as Mike to elevate these songs to another level with his abilities?

John: "Yes. Every time you do a record, you want to raise the bar. We've done that successfully on the last two records. I think 'ExtermiNation' was a big leap forward from 'Walk Through Fire' — we had a killer selection of songs. We'd written a ton of songs; the tough part was choosing the right ones. Joe [Hasselvander] had his heart attack, he's out of the band and we had a couple of fill-in guys to do some U.S. dates and one of them was Mike Heller. We talked for half an hour, he got up and played and we were amazed. And he really nailed it; the two following shows were even better. We had other guys to do the European dates, but we told him we would talk when we got back. He just brought… new blood, a whole adrenaline to the whole thing. We had the songs. He didn't write them per se but his energy and with the arrangements, it took the material that was already good to another level above that. I really think this is the best thing we've ever done. It was a birthing process to get it here, but it was worth all the difficulties. I'm very proud of it."

Dead Rhetoric: You said that you had more than enough songs. How do you end up whittling down the final ten, because that must be a challenge in and of itself?

John: "It's really a great place to be. There's nothing worse than saying 'This is all we've got, let's go with it and hope for the best.' Luckily, we've almost never been in that position, we are very prolific with the writing. We had all these cool songs — what would be a great opener? Where would you go from there? And pick them out like that. There were two or three songs that we thought would be a great opener — we picked 'The Power'. We just went on consensus and we tried it and if it didn't fit, we tried another one. We didn't have it 100 percent sequenced as it were, but it kind of sequenced itself."

Dead Rhetoric: The pandemic has definitely put the live concert market in a state of flux — one of the main methods of making money for most rock/metal artists. How have you been handling this downtime, and what do you foresee things looking like when we are finally able to come out and go to shows again?

John: "I would replace the word flux with another 'F' word. [Laughs] We have dates booked in Europe for February 2021. All things being equal, that's what we are going to do. It's been terrible and my personal views would probably get me locked up. I don't think any of this was justified and it's an overblown nightmare that I hope we get out of it. We are stuck in the situation, a lot of people it's their livelihood. We are lucky that we weren't planning on touring now. I know bands that started a tour in March, and all your costs are upfront. So, they got screwed, the flights, truck rental, what have you. That worked out fine for us. The only good thing is I think there will be a huge outpouring of good will, and people wanting to go out and have a good time as soon as this thing opens up."