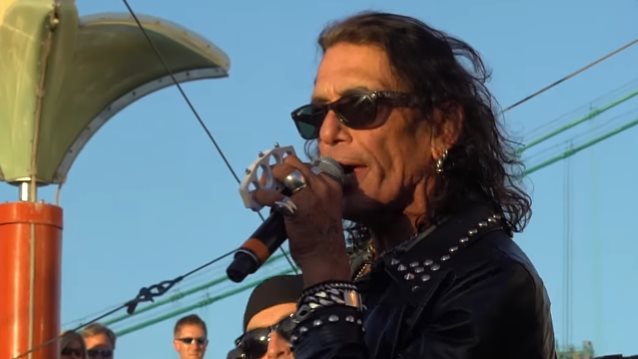 In a new interview with music writer Joel Gausten, RATT frontman Stephen Pearcy discusses his upcoming solo album, "Smash", and the ongoing drama surrounding the legal battle over the RATT name. An excerpt from the feature appears below.

Shortly after "Smash" arrives in music stores and online platforms, fans will also be able to experience Pearcy's latest return to RATT. Currently based around the vocalist and fellow "classic-era" members Warren DeMartini and Juan Croucier with later-period RATT guitarist Carlos Cavazo (ex-QUIET RIOT), the band will be making their return to the stage on February 11 at the Treasure Island Resort Casino in Welch, Minnesota. Pearcy says that a drummer for the rejuvenated band will be announced shortly.

Of course, fans have been seeing a completely different version of RATT — led by classic-era drummer Bobby Blotzer and featuring a revolving door of members — hit stages across the country since the fall of 2015. The media hoopla and legal warfare between the two camps can fill a book, but the short version is that Pearcy and Co. are carrying on as RATT and intend to record a new album in the not-too-distant future.

"We're moving forward as the real band — thank God — in every aspect… I don't need to bad-rap, bash or even dwell into it," Pearcy says. "We're just letting the dust settle, and so be it. It is what it is now, it's the real deal and we move ahead."

The fact that Pearcy, DeMartini and Croucier have been able to regroup for yet another round of RATT is a miracle considering their decades-long history of bust-ups and personality clashes. But at the end of the day, Pearcy believes that what this often combustible combination of musicians is able to produce together on stage and in the studio is still worth the craziness that has occurred between them throughout the years.

"[If] there's one thing that keeps us coming back for more — no pun intended — it's the music, but it has to be the right time and place," he says. "That's why when somebody stepped out of bounds and went off running doing what they did, it was inappropriate… RATT has been around a long time, so we tend to like to do things a little carefully these days [and] not just throw it out there and grab a buck, so to speak. There has to be some kind of reason for it. If we don't do it collectively, then there's no reason to do it. It has to be done right. Just going out there and doing it just to do it doesn't really make sense. We know that people still want to hear it, but it has to be the right time. That's why we took some hiatuses and regrouped. Fortunately, the three of us were able to see eye to eye on this and where we were going and what we wanted to do. That's why we're here again — the music."