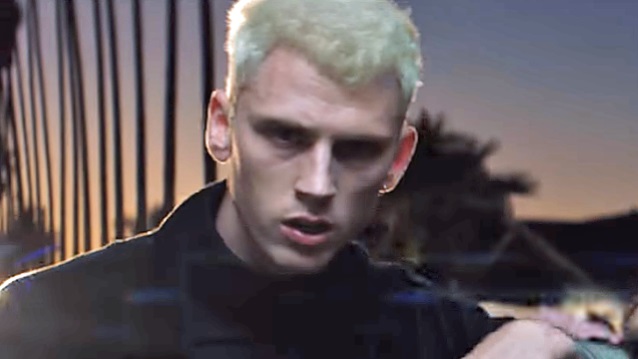 According to Variety, rapper Machine Gun Kelly (real name: Colson Baker) has been tapped to play MÖTLEY CRÜE drummer Tommy Lee in the film adaptation of the group's biography, "The Dirt - Confessions Of The World's Most Notorious Rock Band".

Kelly confirmed the news via Twitter, linking to the Variety article and writing: "And it's finally announced. Excuse me for being crass but.... HOLY FUCKING SHIIIIIIIIIIIIIIT!!!!!!!" He added that his brother has been hired by the film producers as his drumming teacher. "I WILL learn the drums and finish the new album before we start filming," he said.

The film adaptation of "The Dirt" is being helmed by "Jackass Presents: Bad Grandpa" director Jeff Tremaine and is being produced by LBI Entertainment's Julie Yorn and Rick Yorn, along with Erik Olsen and Amanda Adelson, who wrote the script. Netflix will distribute the project, which was previously at Focus and before that at Paramount.

MÖTLEY CRÜE singer Vince Neil previously told Las Vegas Magazine that "The Dirt" movie script stays "pretty close to 'The Dirt', so if you've read 'The Dirt', it's really something to look forward to."

Asked how it struck him that he would be seeing an actor playing him on screen, Vince said: "That's gonna be strange. It's funny, I saw the table read of the last script. They have these different actors playing each person, and even just the table read of the script was weird when the Vince guy was talking. [Laughs] It wasn't the guy that's gonna play me, but it was just kind of weird hearing somebody say your words. It's a bit of a trip."

Bassist Nikki Sixx and Lee attended a read-through of the script in 2014 with Tremaine and were impressed with what they saw.

"Can I tell you it was the most fucking insanely surreal experience I've ever sat through, y'know," Lee told GMI Rock News. "I sat through probably two hours and change of literally watching people act and play through this two-hour-plus movie of your… of 30 years of your life that went by in two hours, and I was just like, 'What the fuck?! That's insane. This movie is insane.' Even just the way the movie starts, you're like, 'How the hell are we gonna rate this thing, triple R?'"

According to Lee, the film won't include any big stars acting as the CRÜE members.

"We're going with all unknowns," he said. "I think that's crucial here, too. Getting known actors would not do anybody or the film or the band or any of that stuff justice. I think it would be watching a well-known actor play Vince or myself or Nikki or Mick [Mars] would be weird, because all of those other movies they've done would be attached to that character, and it would be real hard to remove those. There's a lot of up-and-coming young actors that are fucking amazing, actually."

Deadline reported that last November that British actor Douglas Booth was in negotiations to play Sixx in "The Dirt".

i got the movie to hire my little bro as my drum teacher. kept it in the family. ?? i WILL learn the drums and finish the new album before we start filming.