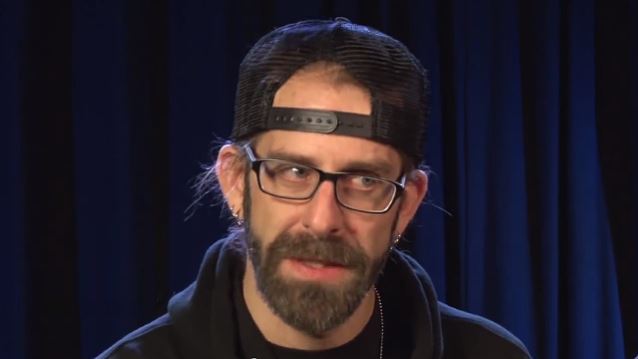 **UPDATE**: Randy Blythe has posted a clarification on his Instagram regarding the time table for LAMB OF GOD's next studio album. He wrote: "Despite what all the metal blogs are blaring 'RANDY SAYS NEW LAMB OF GOD ALBUM EARLY 2015!!!!' — take that with a grain if salt, OK, because they also ignore the fact that during the interview I also say 'The new album isn't written yet.' It will come out when it comes out, after it's done and we are happy with it. When that will be, we shall see. We kinda gotta write the thing first, ya know? I don't have a crystal ball, and I got no other answers than it will come out when it's done."

Singer Randy Blythe of Richmond, Virginia metallers LAMB OF GOD was interviewed on the latest edition of HATEBREED frontman Jamey Jasta's official podcast, "The Jasta Show". You can now listen to the chat using the SoundCloud widget below. A couple of excerpts follow (transcribed by BLABBERMOUTH.NET).

On the release date of his memoir, "Dark Days: My Tribulation And Trials", which will be published through Da Capo Press:

"The new LAMB OF GOD album and the book [will be] released early part of next year, close together. I mean, it's just hard to say with the record, 'cause we haven't written it yet, but the book is almost done."

On whether LAMB OF GOD guitarist Mark Morton will contribute to the lyric-writing process for the band's next album:

"Mark is gonna write some lyrics, I'm sure. We haven't discussed it. With lyric writing, very rarely do we disagree about something. If Mark feels very strongly and he's written something… 'cause Mark writes… He's more into the way things sound, and that's why he's good at writing the hooks. Sometimes with my words, I'll get him to help me figure out how to phrase things. But this record, I'm sure he'll add some."

On what his memoir will cover:

"Basically, the book starts the second I'm arrested [in June 2012 in the Czech Republic and charged with the murder of a fan] and it will end at the end of the trial. And it will go in between. And it will tell, day by day, exactly what [being in] prison [in Prague] was like. But the story of my arrest, incarceration, trial and eventual exoneration, it's just the framework that carries the book along and lets me talk about whatever I want to talk about. 'Cause I go back and forth in time a lot."

On whether he has learned any life lesson as a result of going through this experience:

"No. I address that at the end. No, there's no fucking lesson. People are, like, 'Oh, it's so cool you learned from your mistakes.' No, that's bullshit. No, there is no life fucking lesson here. The only thing that happens is a tragedy; there was a dead kid. The change in my mind, any sort of lesson I learned and psychic change occurred years before, when I got sober. The only thing that going through this whole thing and going back and facing trial — 'cause I felt ethically obliged to do it; I did not have to go back to do that, but I felt obliged to do it — the only thing this has kind of taught me, or whatever, is that it's reinforced that I was on the right path in the first place, and I want to remain the person I already was and continue doing the right thing."