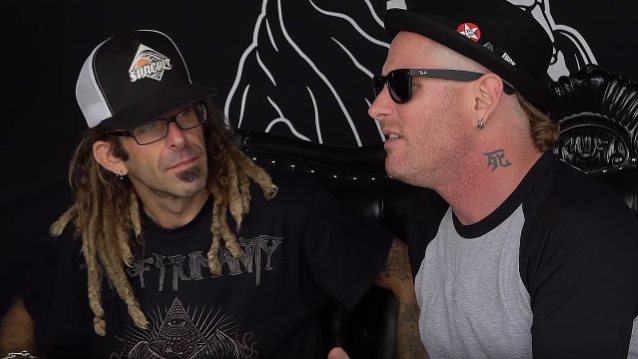 Recalling former President George W. Bush, Randy said: "I reminisce fondly about old G.W. now, compared to our guy now. Who would have thought? Good old George W. Bush. I miss that guy. He was a reasonable man. What the fuck!?

"American politics is a farce of itself right now, it's a parody of itself," he continued. "We have a guy who was in professional wrestling for our president. It's laughable."

Added Corey: "If you wanna know the true story about Trump, all you've gotta do is ask anyone from New York, and they'll tell you exactly what Trump [is all about]. 'Cause they've been living with his weirdness for thirty years, you know? And the fact that he's bankrupted more companies than anyone even knows about, and yet all of these Trump-heads poised him up as the savior of America. It's just, like, you've gotta be fucking kidding me! Jesus Christ!"

Blythe argued that media bias now is in part a financial decision, with outlets eager to use Trump to boost ratings.

"You look at CNN, it's saying one thing, and you look at Fox News, it's saying the other," Randy explained. "And you look at these two different things and their language is not objective journalism anymore — it's one thing or the other, its agenda. And so people that look at Fox News as their primary news source, that's what they believe. People who look at CNN as their primary news source, that's what they believe. So I go on these horrible comparison binges where I'll look up CNN, NBC, Fox News, BBC, Al Jazeera and just try and see if I can pick out of this diaphanous fog of bullshit some nugget of truth. But it's really hard to find, 'cause everybody's selling something."

Added Corey: "Ironically, if you want real-deal journalism these days, newspapers… Newspapers are still — to this day — so much more grounded and so much non-biased that you can kind of start to get a better picture of what's going on. However, that's starting to bleed into the fucking print as well. It's alays been that way, but newspapers are held to a higher form of subjection, they're held to a higher form of scrutiny when it comes to stuff like that. Whereas TV, they passed a mandate in the Reagan era that kind of stripped away the watchdog laws that went around with a lot of the TV, national-news stuff. So it's easier for the national news to get away with being one way or the other, whereas the newspapers are still held to that very strict [standard of journalistic integrity]."

Blythe told Yahoo! Music in a recent interview that he voted for Hillary Clinton over Donald Trump in the last presidential election as "strictly a choice of the lesser of two evils." He said: "This is one of the worst, if not the worst, most bizarre, brutal electoral seasons I've ever seen. And I think it's been the craziest in the lifetimes of many people who are way older than me as well."

At the end of 2015, Blythe made it clear that he was not impressed with then-Republican presidential hopeful Trump, saying that he would "leave America" if the the real estate magnate and former reality TV star became President Barack Obama's successor.

Taylor has also been vocal about his distaste for Trump for at least the past two years, telling a Des Moines, Iowa radio in a 2015 interview that he would "emigrate" if Trump became president. "It is embarrassing that he is the 'leader of the free world,'" he recently told Rolling Stone. "He can't go away fast enough. And I think people are really starting to see that."