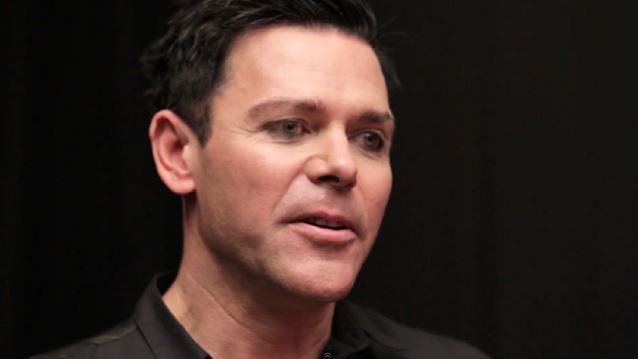 "I think RAMMSTEIN [is one of] those things [that] can never be over," Kruspe said (see video below). "The thing [about] those things is that they develop their own chemistry, their own energy. I think even if we would say it would be over, it would never be over. So if you're asking me if we're doing something right now, the answer is, we're taking time off."

He continued: "We just met a couple of months ago and we were just talking. We always meet once a year to see how everyone is, how people are. And so we decided to not do anything at the moment, so we'll meet up next year again. But there's so many things that we have in the pipeline that we're gonna do… We have a live DVD coming out, we have another live DVD coming out, we have another live DVD… We have so many live DVDs right now that we have to work that through. So, I think, at the moment, everyone does his own thing. I think it's important, because, again, RAMMSTEIN was always a band that took their time, that listened to themselves, listened to what they need, how much time they need between [albums]."

He added: "One good thing about that the music industry changed is that you don't have to do a record every year — it's not necessary — and I think a lot of people that did this put [out] records that weren't that great. So I like that idea, actually, to take breaks. Again, I think we will come back together. I love touring with RAMMSTEIN, and if somebody has a vision for a record, we'll do another record."

RAMMSTEIN's long-awaited retrospective release, "Made In Germany 1995 - 2011", was made available in December 2011 through Universal Germany's marketing and distribution deal in the U.S. with Vagrant Records.

"Liebe Ist Für Alle Da", sold 22,000 copies in the United States in its first week of release to debut at position No. 13 on The Billboard 200 chart. Previously, the group's best rank came with its 1998 chart debut, "Sehnsucht", which peaked at No. 45 off the strength of its only U.S. radio chart hit, "Du Hast".

"Liebe Ist Für Alle Da" was produced by Jacob Hellner and RAMMSTEIN, with recording done at Northern California's Sonoma Mountain Studio. The first single from the 11-track release was "Pussy", which was released as a digital single on September 22, 2009 and accompanied by one of the year's most viral videos.