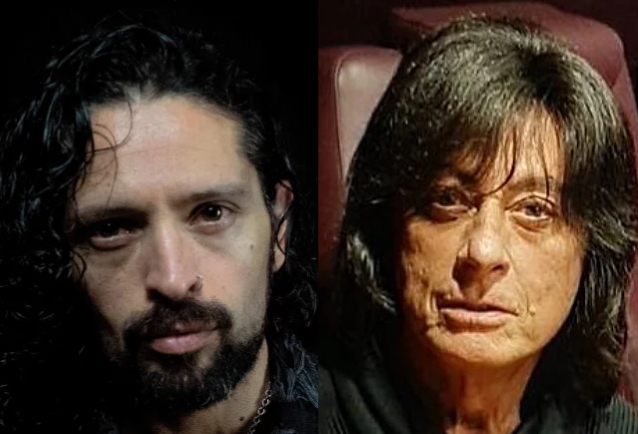 RAINBOW singer Ronnie Romero has denied trying to steal jobs away from Joe Lynn Turner, insisting that the former RAINBOW frontman is one of his "favorite" vocalists.

In January, Frontiers announced that going forward, SUNSTORM will now be a vehicle for "one of the most impressive vocal talents to emerge in recent years" in the form of Romero. Romero's debut album with SUNSTORM, "Afterlife", will arrive on March 12. The first taste of the LP came with the release of the single and video for the track "Swan Song".

A short time after Frontiers' announcement, Turner, who recorded five albums with SUNSTORM between 2006 and 2018, gave an interview to Vintage Rock Pod in which he blasted Frontiers Music Srl for continuing SUNSTORM without him, claiming that he had "no idea" the Italian record label would replace him in the project and accusing Frontiers of "lying" about the reasons he is no longer involved with the brand.

Romero, who is originally from Chile but is now settled in Romania after living in Madrid, Spain for a number of years, spoke about Turner's comments during a recent interview with the "Aftershocks" podcast. He said (as transcribed by BLABBERMOUTH.NET): "It's funny that it looks like I'm always chasing Joe Lynn and trying to steal his jobs. [Laughs] For sure, he has this feeling with me. But it's exactly the opposite. Somebody asked me about [how I got the] RAINBOW [gig], and I said I was just sitting on my couch one day and I got a call from Ritchie Blackmore. I didn't call Ritchie, first of all. I was not chasing Ritchie: 'Put me in the RAINBOW band.' I got the call — that's it. And, obviously, you cannot say something different [than] 'yes' to Ritchie Blackmore. I didn't have any idea about any previous negotiation or something else that Joe had with RAINBOW or anything else like that. And then with this SUNSTORM thing, it was totally the same thing. I just got a call from the record label, and, actually, my first question was — because I'm a huge fan of SUNSTORM — I said, 'But what happened with Joe? Everything is okay if I do this?' And they said, 'Everything is okay.' Obviously, it was not that okay. [Laughs] But I can separate the idol from the person."

Ronnie went on to say that Joe is one of his favorite singers. "I know the [Ronnie James] Dio fans are gonna kill me, but he's my favorite singer from RAINBOW; my favorite era from RAINBOW is with Joe Lynn Turner. I just love him. With my fiancée, we're singing all the time 'Stone Cold' at home. But then you read this kind of statement and that kind of thing, and I can understand — he's angry inside because of the record label, or whatever. But it's not my deal, it's not my fight. I'm just doing the music, I'm just getting paid for that, and that's it."

A year ago, Turner once again slammed Blackmore for the guitarist's decision to go out and perform classic DEEP PURPLE and RAINBOW material with a new group musicians instead of reforming RAINBOW with a more "authentic" lineup.

Turner criticized RAINBOW's current lineup, saying "the RAINBOW [Ritchie] put together is nostalgic, but it is not RAINBOW. They never did an album, and all they do is these spot dates. And anybody who goes to see them, it's all over YouTube. And that's really all I've gotta say about it. If you ask me, he's cheating the public. And that wasn't my intention [when I approached him about reforming RAINBOW]. So happily I go along. Ritchie is allowed to do whatever he wants to do, and so I am. And I don't need the hassle. So it's great."

Joe sang on the RAINBOW album "Difficult To Cure", which featured the band's most successful U.K. single, "I Surrender".