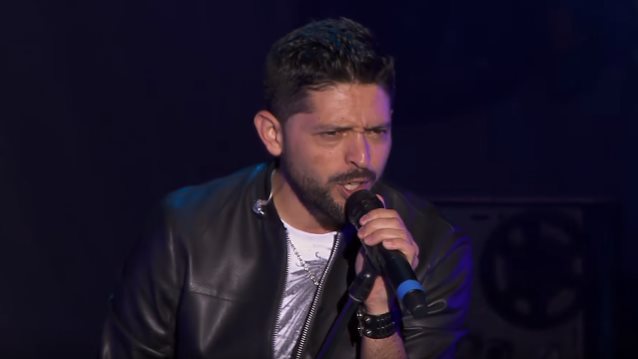 RAINBOW singer Ronnie Romero has revealed to Spain's MariskalRock that the band recorded fresh material earlier in the year, with plans to make it available in the coming months.

Back in May, the revamped version of RAINBOW released its first new music in more than two decades. Two tracks were made available on iTunes: an instrumental song called "Land Of Hope And Glory", which is is a reworking of the 1902 British patriotic song of the same name from Edward Elgar's "Pomp And Circumstance March No. 1", and a re-recording of the RAINBOW classic "I Surrender", which was written by Russ Ballard and was first released by RAINBOW in 1981. The latter song features vocals recorded by Romero, who is originally from Chile but is now settled in Madrid.

Asked by MariskalRock if there are any plans for RAINBOW to record and release more new tracks, Romero said (see video below): "As a matter of fact, we recorded some stuff back in January. Actually, there is a new track scheduled to be released, though I don't know when. Ritchie [Blackmore, RAINBOW leader] is constantly trying new stuff just to see how it works out. That's why he released the new version of 'I Surrender' and the instrumental version of 'Land Of Hope And Glory'."

Blackmore stepped away from his Renaissance-inspired brand of music with BLACKMORE'S NIGHT last year to perform a handful of shows with a brand-new lineup of the band he had formed after quitting DEEP PURPLE.

The two shows RAINBOW played in Germany in June 2016 were caught on camera to produce "Memories In Rock - Live In Germany", which was released in November via Eagle Rock Entertainment on DVD+2CD, Blu-ray+2CD, and digital formats.