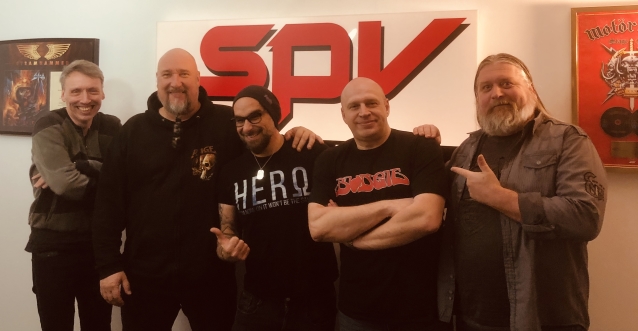 15 years after the arrival of their live recording "From The Cradle To The Stage", German metal veterans RAGE have returned to SPV/Steamhammer. The band — featuring frontman Peavy Wagner, guitarist Marcos Rodriguez and drummer Vassilios "Lucky" Maniatopoulos — is working on material for its upcoming album, "Wings Of Rage" (working title), scheduled for release on January 10, 2020. The disc's first single will arrive in September, to be followed by the second single just before Christmas.

RAGE's 25th studio album, "Wings Of Rage" will be recorded at the Soundchaser Studio in Burscheid. Peavy promises an offering featuring "the essence of our musical development, the kind of songs that we have stood for since the mid-eighties."

RAGE is planning to embark on a festival tour across Europe this summer, performing the full "XIII" album with the LINGUA MORTIS ORCHESTRA live for the first time. The show had its baptism of fire at the 70000 Tons Of Metal cruise, and a special highlight will be RAGE's appearance at the Wacken Open Air at the beginning of August. Toward the end of the year, RAGE is scheduled to play several important winter festivals, before the "Wings Of Rage" tour kicks off in February 2020.

"We're really happy to be back with SPV/Steamhammer," says Peavy Wagner. "Since our very successful and enjoyable collaboration in the early 2000s, we've known that we're in expert hands with Olly Hahn and his team. Olly and I share a longstanding friendship. He will continue to promote RAGE with his usual commitment."

SPV/Steamhammer label manager Olly Hahn is delighted with his new signing. "It's fantastic to have a band such as RAGE on our roster again," he says. "Their outstanding role in the development of German metal is undisputed. To be in a position to release their 25th studio album fills me with great pride and ambition."