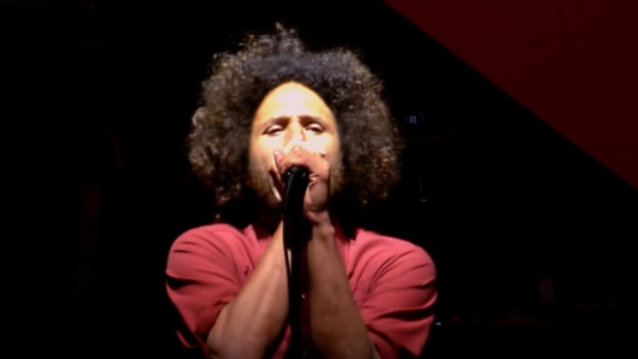 RAGE AGAINST THE MACHINE's Tim Commerford says that his band will "never" play a drive-in concert. The bassist made his comments to TooFab while out on a quick hardware store run in Los Angeles earlier this week.

Speaking about how the coronavirus pandemic has affected the concert industry, Tim said (see video below): "Musicians got kicked to the curb, man. Musicians and barbershops and gyms, we're the last ones to go. So it's stressful for me, just because I look at RAGE and go, like, 'Fuck, we rely on an audience.' You go to RAGE shows to see the audience as much as to see the band, and we need that. We're one of those bands that need that.

"We'll never be one of these sellouts that's gonna go play a drive-in show or play a venue that holds a hundred thousand people and there's only ten thousand people there," he insisted. "That's bullshit. RAGE will never do that. It's not a good show unless the audience is going off too — it's gotta be a shared experience."

Commerford also talked about his disappointment over the cancelation of RAGE AGAINST THE MACHINE's comeback appearance at the Coachella festival in Indio, California. He said: "It was already gonna be something really special. Without getting into it, we were doing things that we had never done before, and we're all better musicians than we've ever been before, so the music was all time, and it was just exciting. It was gonna be a really great new version, a new exciting version of RAGE, you know? Plus, we were [going to be] on tour with RUN THE JEWELS, and they put their record out, and it was the biggest hip-hop record of the year. So it was gonna be a really great tour. And I've got my fingers crossed that the world will fix itself."

RAGE AGAINST THE MACHINE was set to tour last year for the first time in more than a decade until the pandemic pushed those plans to 2021.

The reunited quartet — Zack De La Rocha, Tom Morello, Brad Wilk and Tim Commferford — was supposed to play its first concerts back together in March 2020 at several cities along or near the Mexican border, with several dozen U.S. and European dates booked through the end of last summer.

When it eventually happens, the upcoming tour will mark the first time RAGE AGAINST THE MACHINE has hit the road together since 2011.

RAGE AGAINST THE MACHINE last played together at L.A. Rising and has resisted calls for a reunion, with vocalist De La Rocha previously believed to be the lone holdout. Guitarist Morello and his fellow RAGE bandmates Commerford (bass) and Wilk (drums) have since teamed up with PUBLIC ENEMY's Chuck D. and CYPRESS HILL's B-Real in the similarly styled PROPHETS OF RAGE.

RAGE AGAINST THE MACHINE recorded three original studio albums and one set of covers before breaking up in 2000. The group reformed in 2007 but only played sporadic gigs and never a full tour.