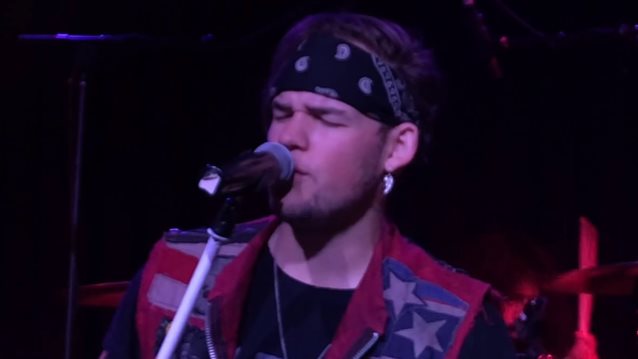 QUIET RIOT played its new song "Freak Flag" live for the first time Friday night (June 23) at Phase 2 in Lynchburg, Virginia. Fan-filmed video footage of the performance can be seen below.

"Freak Flag" is taken from QUIET RIOT's new album, "Road Rage", which will be released on August 4 via Frontiers Music Srl.

Durbin, who became known as the "metal guy" on 2011's season of "American Idol" after performing "Living After Midnight" and "Breaking The Law" with JUDAS PRIEST, hooked up with QUIET RIOT last month after the dismissal of Seann Nicols (a.k.a. Sheldon Tarsha; formerly of ADLER'S APPETITE). Nicols was with QUIET RIOT for just a few months, but long enough to record the vocals for an early version of "Road Rage".

Banali said: "QUIET RIOT has always recorded songs that have a link with the QUIET RIOT 'sound' and at the same time always musically moving forward. 'Freak Flag' is such a song with a strong connection to our iconic sound from the past, which I think our longtime fans will appreciate and newer fans will embrace."

Durbin added: "'Freak Flag' is a concept I've been holding on to for a few years. It's all about being you no matter what life has labeled you with. We're all broken and searching for acceptance, but there's a beauty in that search and it's something that should be celebrated."