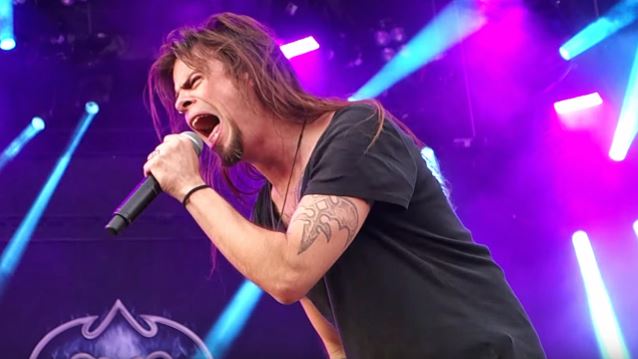 QUEENSRŸCHE vocalist Todd La Torre was interviewed for episode 288 of the "Iron City Rocks" podcast (web site). You can now listen to the chat using the audio player below.

Speaking about how the the music consumption and music piracy habits of consumers have affected bands like QUEENSRŸCHE, Todd said: "People are listening to shitty MP3s; they're not getting all the good sonic qualities of the versions on the CD itself. The younger generations, for the most part, are detached from the experience of opening the CD. Everyone just wants to download stuff from iTunes or wherever, put their MP3s in their iPod and create their own playlist, and then… Then there's a sense of entitlement: You made the music. I deserve to have it now.' And then your shit's on torrent sites, and everyone's ripping you off. But they see you on a tour bus and playing shows, and they're, like, 'Well, they're loaded. They've got plenty of money. I'm not really hurting them if I download the record. Who's gonna know or care?' And it's such a damaging, systemic problem, and it's exponential. One guy says that, and then the next guy says it. Next thing you know… Go look at the music section… Where's your local music store? The Spec's Music and Camelot and Turtle's and whatever, all the big music stores are gone. You have these really cool kind of mom-and-pop record stores that are really cool. But, I mean, you go into these retailers, and the CD section is very… It's either nonexistent or very downsized, very small."

He continued: "Another thing is, in the United States, they haven't adjusted the criteria for gold and silver and platinum and all that. It's still five hundred thousand sales for gold, which is, like… C'mon! Unless you're a very famous pop artist, you're not coming anywhere near those numbers. In Germany, gold is a hundred thousand, and some [other] countries are sixty thousand. And maybe it's because of the population and how it relates to how many people are in the country. But my point is, what rock bands are getting gold records now? Nobody! Nobody! And it's a travesty, because there was a perception and a value placed on record sales and charting, and now it's just like, you know, your record is a business card to get people to come out and check your show out, and hopefully they buy a t-shirt. That's really the bottom line. It's a very hard business."

La Torre also talked about how the Internet being flooded with an abundance of music and the oversaturation reduces artists' hard work into another fragment lost in the sea of information. He said: "It's an interesting time for this business, for sure. I remember when MTV was a thing, and there was a video, and I was, like, 'Wow!' Now it's, like… Having a video isn't special. They're cool and they're neat, but it's not special. Everybody has a YouTube channel, everybody has a camera… Everyone is an engineer now, 'cause they have a recording platform. Everyone can do it on their own, and it's awesome in some ways, because back in the day, the only way to get a good recording was you had to go to a real studio and pay real money. Now you can do it in your house, and you can still engineer great things from your home. The exposure, the accessibility and the marketability for artists is so much better, but it's become so saturated, and thus it makes our attention span shorter. You go on YouTube, you click a video, then you see ten things on the right side of your column that might pique your interest. Before, it was MTV world-premiere video. You had to wait around to see it. And there was something to be said for that suspense and anticipation. It made it cooler."

QUEENSRŸCHE's new album, "Condition Hüman", debuted at No. 27 on The Billboard 200 chart, having shifted 14,000 equivalent album units in the week ending October 8.

"Condition Hüman" was released on October 2 via Century Media. The CD was recorded in part at at Uberbeatz Studio in Washington with producer Chris "Zeuss" Harris, who has previously worked with ROB ZOMBIE, HATEBREED, SOULFLY and SHADOWS FALL.