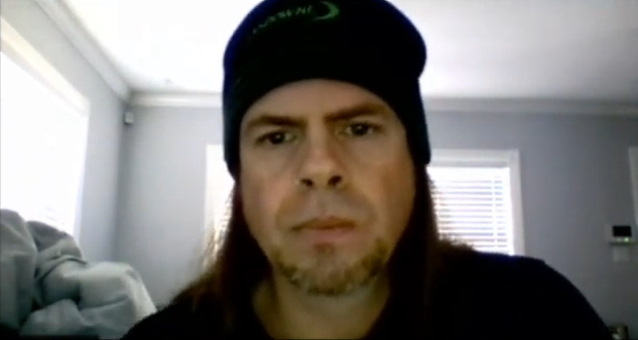 QUEENSRŸCHE frontman Todd La Torre has told Rock Titan TV that he no longer subscribes to the notion that once musicians hit a certain age, their chances of reaching commercial success lessen.

"That was always my opinion," Todd said (see video below). "When I reached my late 20s or 30, I was, like, 'Okay, it's never gonna happen for me.' And then I joined CRIMSON GLORY and started to get notoriety mostly in Europe. But you know what? I think that's all bullshit. I think that this is a genre that doesn't really care. It's not like pop where your prime window is this. Or if you're a football player, unless you're Jerry Rice or somebody that can play really long at your career, it doesn't matter, your age. It's all really about just the songs and the music. There are a lot of people that get discovered in their 30s [or] 40s, whatever. Whether they join an established band and that's their big springboard or sometimes they write a killer song."

The 46-year-old singer, who resides in St. Petersburg, Florida, added: "There's plenty of bands that end up, quote, making it — whatever that even means anymore — later in life, so I think for those people that feel discouraged, like it's never gonna happen, I certainly understand that and I empathize with that position, but I wouldn't say that that's certainly absolute by any means, and my story is an example of that."

Todd will release his debut solo album, "Rejoice In The Suffering", on February 5 via Rat Pak Records. He created the LP with his songwriting partner Craig Blackwell and producer Chris "Zeuss" Harris.

La Torre joined his first band BLACKWELL as the drummer, performing in high school talent shows and entering into the club rock music scene in Tampa Bay, Florida. In 2009, Todd was suggested to CRIMSON GLORY guitarist Jon Drenning by a mutual friend to help with some vocal rehearsals in preparation for a CRIMSON GLORY memorial concert. This would pave the way for more collaborations with the band, eventually joining as the band’s new permanent vocalist. La Torre was the lead singer for CRIMSON GLORY from late 2010 until resigned from the band in early 2013. In 2012, Todd became a household name in the metal world when he officially became the new lead vocalist of QUEENSRŸCHE. The band immediately began touring globally and started writing new material for the self-titled 2013 album "Queensrÿche". To date, QUEENSRŸCHE has released three studio albums with La Torre: "Queensrÿche", "Condition Hüman" (2015) and "The Verdict" (2019). Currently the band is writing new material for a fourth release for Century Media Records.