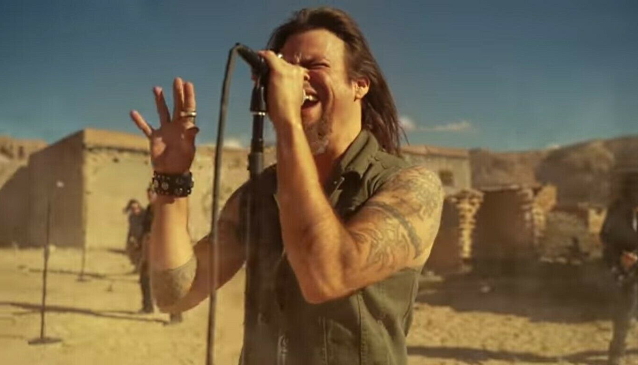 QUEENSRŸCHE singer Todd La Torre is selling the clothes he wore in the band's "Blood Of The Levant" video. The vest and jeans are being made available on eBay with a starting bid of $750.

A message on the eBay auction page reads: "Vest brand is RUDE (Men's size small) and has been unmodified. Jeans (Women's size 1) with no size alterations. Jeans modifications have custom denim layers on knee, painted streaks on front and back of pant legs, with D rings sewn to one side of pants. No tears in vest or jeans. Item is sold as is."

The auction will end on Monday, January 6.

"Blood Of The Levant" is taken from QUEENSRŸCHE's latest album, "The Verdict", which came out in March via Century Media Records.

When the clip was first released in February, La Torre said in a statement: "We are very excited to unveil our new video 'Blood Of The Levant' from our upcoming album 'The Verdict'. This song and video is based on real events that sparked the onset of the Syrian war. We would like to thank David Brodsky and Allison Woest from MyGoodEye Music Visuals for bringing our vision and concept to life on screen! A very special thanks as well to the additional cast and crew for their valued dedication to this effort."