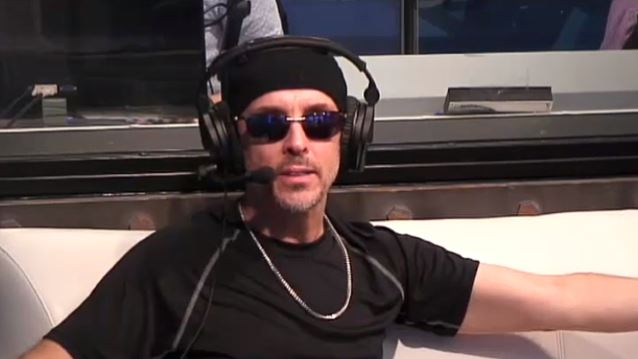 QUEENSRŸCHE drummer Scott Rockenfield was interviewed on a recent edition of "Rover's Morning Glory'. You can now watch the chat at RoverRadio.com. A few excerpts follow (transcribed by BLABBERMOUTH.NET).

On the split with QUEENSRŸCHE's original singer Geoff Tate:

"We had a great career and great times. We made great records for a long time. But, you know, life takes changes, where things just need to go in different directions.

"For us, really, all we ever did was just carry on. We knew what was going to be best for the brand of QUEENSRŸCHE. And it had gotten to the point when that brand was not focused. Certain ones of us wanted to make music that we thought was important for QUEENSRŸCHE and that we enjoyed.

"I think we just knew that it was time to move on and that we would do what was right. QUEENSRŸCHE was always about the chemistry of all of us working together; that's why the music was what it was and that's why our fans followed us in what we did. When we had to make the choice and go through the transition, we just knew that we had such a loyal following that they were at least gonna give us the chance to try."

On whether Rockenfield and fellow QUEENSRŸCHE members Eddie Jackson (bass), Michael Wilton (guitar) and Parker Lundgren (guitar) had the intention of firing Tate before holding the ill-fated meeting in Brazil in April 2012 that ended in verbal and physical abuse:

"The goal was always to sit in a room and talk about doing better business together and ideas. We are a democracy, and the majority wanted to do this. And so you flow with that. And there was a goal and a reason why. You have to go through waves and changes and rethink things as a company to do things, and that's all we did. We'd sit around and have these meetings, but those meetings weren't met with the right responses from all of us."

On when the animosity between Tate and the other members of QUEENSRŸCHE first started:

"It was long enough to make a difference where that's why we had to start, as a company, and as… looking at what QUEENSRŸCHE was doing, and then our happiness within that. You know, the music wasn't going where we want it to go, and you start realizing that you just have different a thing that you wanna do."

"It's been an amazing chemistry. Our personalities together are really great — our vibe backstage and living together on top of each other. Traveling the world is very comfortable. So that's a really nice aspect that we haven't had for a long time. And then the chemistry of making music. And then our legacy music. Todd is great at supporting that and sounds really great with it. He's able to add his own thing, but still, the fans have embraced it all over the world and they continue to do so in bigger and bigger numbers every time we go out. So it's been really great."

QUEENSRŸCHE's new album, "Condition Hüman", was released on October 2 via Century Media. The CD was recorded in part at at Uberbeatz Studio in Washington with producer Chris "Zeuss" Harris, who has previously worked with ROB ZOMBIE, HATEBREED, SOULFLY and SHADOWS FALL.