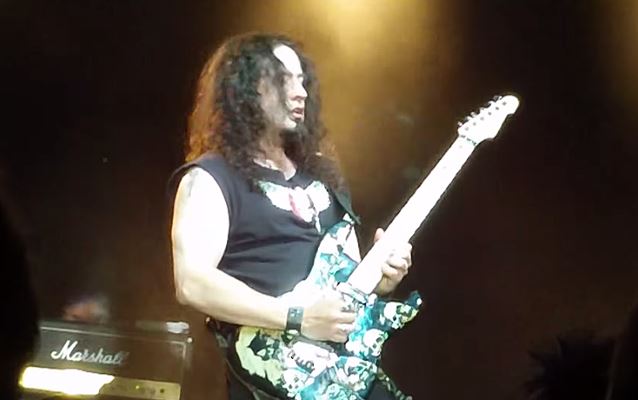 QUEENSRŸCHE and SOULBENDER guitarist Michael Wilton was interviewed on the September 22 edition of 99.1 CJAM-FM's "The Signals Of Intuition" radio show. You can now listen to the chat below.

Asked what new QUEENSRŸCHE singer Todd La Torre has brought to the band in the two years since QUEENSRŸCHE's split with original frontman Geoff Tate, Wilton said: "Well, getting Todd in the band has really changed the dynamic creatively, and there's a cohesive friendship in the band now, [and] we're all on the same wavelength. He's different in the aspect that he's a real musician — he plays drums really well, he plays guitar really well, and he sings, and he can play a little bit of keyboards, so… In the communication area, as musicians communicating to musicians, it's that much stronger in that sense, of the communication in the band. So, just in that right there, that's just miles of greatness that we've achieved doing that, and it's brought everybody closer together. And communicating, and just a cohesive link for everybody to create their ideas and throw 'em into the pool as far as communication and being on the same wavelength. So it's really changed the whole inner writing dynamic of the band."

Speaking to Pop-Break.com last month. QUEENSRŸCHE stated about the band's relationship with Tate prior to the June 2012 split: "The conflict started years ago, but prior to it, when we were all still working together in the 'old band,' so to speak… we had been in a dark place for a long time. It wasn't going well, the years were stacking up on us, we weren't making the music that we were passionate about and were being forced to do a lot of things that we didn't want to do. We weren't being allowed to play all of the music that we wanted to play live, and to give our fans what we thought was important. The darker the hole we kept falling into, the faster we wanted to get out of it."

Rockenfield described the union with La Torre as "exactly what we needed to do," adding, "We just feel so good about where we're at. It was meant to be; it was the right decision. We're happier, the fans are happier, they're certainly enjoying the music we play live, and have certainly given us great feedback on the record we put out last year. So overall, everything worked out really well. The morale, for us, just kind of became perfect. I mean, the second we transitioned and got Todd in the band, the morale just went through the roof for us, you know? There was no weird dark clouds for us, and we just don't have that anymore. We're really close to each other. We have the same common interests, we're energetic, and we're happy! We're all working together as a team, and it's not just one person saying, 'you have to do it like this,' it's all of us making the decisions together and making the music together. Long story short: the morale is really high, we're having a great time, and we all really know what we want to do and why we want to do it. I think that's why the fans like what we're doing now — they can see that we're happy and that we're being honest again."