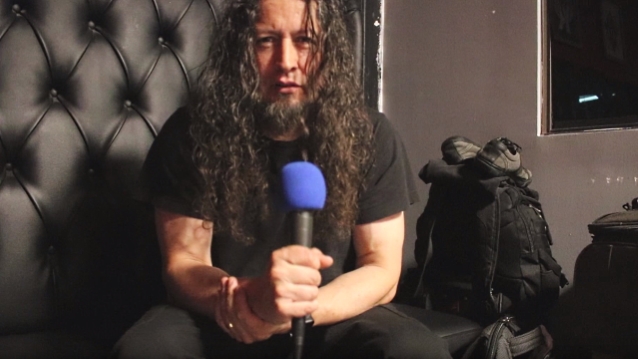 QUEENSRŸCHE guitarist Michael Wilton was recently interviewed by The Mighty Z (a.k.a. Zoran Theodorovic) of Capital Chaos TV. You can now watch the chat below.

Asked what he likes best about the current state of the music industry and how it has improved for QUEENSRŸCHE since the band first started, Wilton said: "Obviously, we've had to adapt to technology, being such a major part of the equation. You have to adapt and overcome, basically. I think, obviously, there's more music fans in the world now, so it's a better opportunity for us to reach them. And with technology, you have to use it to your advantage. For example, now you can do a video and it can be done and edited in a couple of days, and it's insantly on YouTube. And you couldn't do that in the '80s. So there's a lots of different things that are really positive about the industry today, but then there's a lot of things that really suck, like [music] streaming. It's great for the listener, but it's killing a lot of bands out there. But you've just gotta adapt to the way things are."

Wilton was also asked at what point he noticed file sharing and downloading affecting QUEENSRŸCHE's revenue stream. "It's still prevailing now," he replied. "Before [QUEENSRŸCHE's new album] 'The Verdict' was out, our manager hired a Russian software company to hit all the torrent sites, and I think there was probably about a hundred of them already having downloads of the music. I don't know how they get it so fast. And there's no way of stopping it — it's part of the equation. And yes, it hurts bands — it hurts sales and the way things are perceived as successful these days."

"The Verdict" was released on March 1 via Century Media Records. The disc was produced, mixed, and mastered by Chris "Zeuss" Harris (ROB ZOMBIE, ICED EARTH, HATEBREED) at Uberbeatz in Lynwood, Washington; Planet-Z in Wilbraham, Massachusetts; and Watershed Studio in Seattle, Washington.

For the past two years, drummer Scott Rockenfield has been taking time off from QUEENSRŸCHE's touring activities to spend time with his young son, who was born in early 2017. Filling in for him is former KAMELOT drummer Casey Grillo.

QUEENSRŸCHE's spring U.S. headline tour with special guests FATES WARNING kicked off on March 2 in Orlando, and will wrap on April 3 in Seattle.