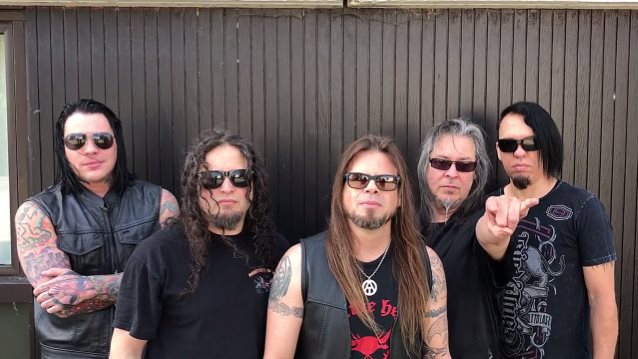 Shut Up & Rock On conducted an interview with QUEENSRŸCHE singer Todd La Torre prior to the band's August 5 performance at the Clearfield County Fair in Clearfield, Pennsylvania. You can now listen to the chat below.

Asked about the progress of the songwriting sessions for QUEENSRŸCHE's next studio album, Todd said: "We're just kind of finishing up the songs that are there. And due to some scheduling issues, we had to push recording back from… Originally, we were gonna start in September, but it'll be October now. So not far off. After this, we've got shows all month, fly dates all month in August, and then some stuff in September. And then October we'll start doing pre-productiong and recording. We still have some shows throughout the year, but just kind of tidying up what's there now, the music."

Regarding the musical direction of the follow-up to 2015's "Condition Hüman" album, Todd said: "It's still a little early, because a lot changes in pre-production. So you say, 'Okay, well, let's take this out and change this and swap that,' and you come up with new ideas. I think it'll be a little more uptempo than the last one — probably some more faster-paced songs. Kind of eclectic, but hopefully once it's all done, it'll have a more uniform sound."

La Torre also talked about the status of his debut solo album, which he has been slowly putting together for the past few years with his "lifelong friend" Craig Blackwell. "That is still in the works," he said. "A lot more material has developed [in recent months]. It's kind of hard because QUEENSRŸCHE, that takes all my time."

Todd said that his solo project will "be pretty heavy. In fact, [Craig] just sent me some other stuff the other day that has some elements of black metal," he added. "It's just gonna be probably just a very power-groove thrash metal album."

He added: "QUEENSRŸCHE is very special and very unique. This is definitely much heavier. I would say along the lines of… if I had to categorize it, somewhere between FIGHT and PANTERA — like, the riffs — and maybe a little bit of BLACK LABEL SOCIETY, but with my vocal stylings."

According to Todd, his solo record will provide him with an opportunity to explore other vocal styles that he hasn't been able to utilize in QUEENSRŸCHE.

"I'm gonna have a mixture," he said. "Some stuff is very deep gutturals, some of it will be a lot more of the raspy, scratchy side of my voice. Some clean melodic stuff too, but overall, it'll be just very aggressive, I think — very aggressive."

Helming QUEENSRŸCHE's next record once again will be Chris "Zeuss" Harris, who previously worked on "Condition Hüman".

The upcoming disc will be QUEENSRŸCHE's third to feature La Torre who joined the group in 2012.