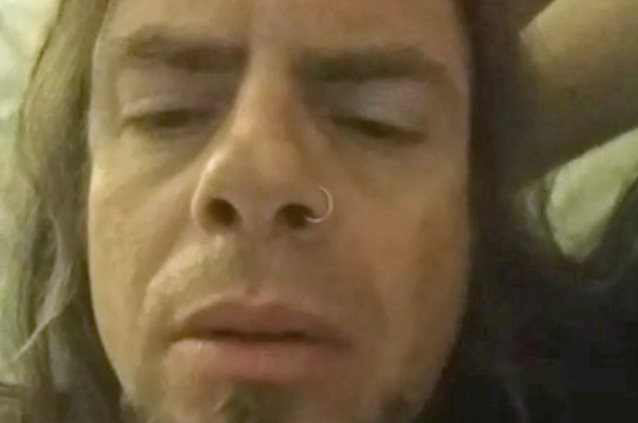 QUEENSRŸCHE frontman Todd La Torre, who was born and raised in St. Petersburg, Florida and still lives in the area, has posted a video message expressing his concern for the well being of his family as Hurricane Irma approaches his hometown.

La Torre, who performed with QUEENSRŸCHE Saturday night at the Grand Casino Hinckley Amphitheater in Hinckley, Minnesota, was checking in from his hotel room, unable to get a full night of sleep as he knew his loved ones were facing the danger of wind gusts, storm surge and flooding.

In the video, which can be seen below, La Torre said: "It's 4:11 here in Minnesota, and we had a really great show tonight. But the most important thing is Florida where Casey [Grillo, QUEENSRŸCHE's stand-in drummer] and I live. And we are stuck here indefinitely until we can fly home. So our wives and families are staying put, and I'm kind of trying not to freak out, but I'm kind of freaking out.

"What an ordeal! My head is so fucked up right now, I don't even know what to think," he continued. "So many friends and people in Florida. My mom had to evacuate. She lives in a stilt house on the water, so she's going to my place with my wife. And there's no telling what hundred-and-twenty-five-, hundred-and-thirty-mile-an-hour winds are gonna do. So part of me is just completely fearful that not just myself and my mom, that we're not gonna have a house to come home to. And, of course, their safety is my number one concern — not so much the house, but… This just sucks.

"Casey and I are here till we can fly back to Florida. And I think shit's supposed to get real today in a matter of hours."

The singer added: "My mom's gonna be at my house about eight in the morning, so as long as she can drive there and get situated… She was in an evacuation. Luckily, my house is in the highest area of St. Pete, so it's not the storm surge that's concerning me where I live, it's the wind.

"See, I did insurance adjusting for several years, and I've seen tree limbs the size of my arm — not big — pierce right through roofs like a needle in a pin cushion, and I've seen lives devastated.

"I know you guys [in Florida] are gonna lose power — I mean, that's just a given — but hopefully their cell phone service signal… I imagine it's gonna sound like a freight train for ten to twelve hours or longer. So I can't imagine that I'm not there with my mom and my wife and Vader, our little dog."

Grillo, a member of KAMELOT, made his live debut with with QUEENSRŸCHE on April 1 at Sycuan Casino in El Cajon, California. He is filling in for regular QUEENSRŸCHE drummer Scott Rockenfield, who is taking time off from the band's touring activities to spend time with his newborn son, appropriately named Rockson.

QUEENSRŸCHE is expected to enter the studio this fall to begin recording its new album for an early 2018 release. Helming the disc once again will be Chris "Zeuss" Harris, who previously worked on 2015's "Condition Hüman".