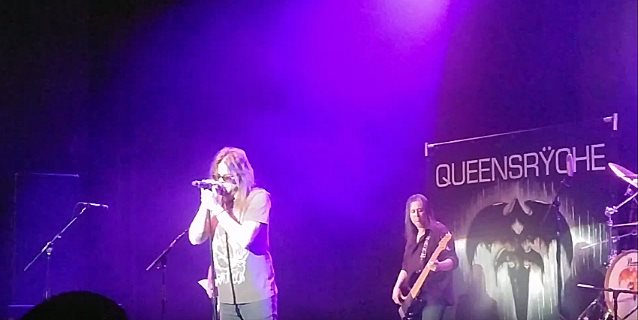 Seattle-based progressive metallers QUEENSRŸCHE paid tribute to Chris Cornell by performing the TEMPLE OF THE DOG song "Say Hello 2 Heaven" in the SOUNDGARDEN frontman's honor during QUEENSRŸCHE's May 20 concert at the Hard Rock Hotel And Casino in Biloxi, Mississippi.

Prior to launching into the track, QUEENSRŸCHE singer Todd La Torre addressed Cornell's passing, telling the crowd: "So many of us have seen just all of these amazing people that touch our lives. And a lot of us, including the band, music is our escape, so when we lose an artist that writes music that touches our heart, I don't know that the artists even realize how that might feel to a lifelong fan or a listener. It's our friend, right? It's our therapy. And so it was tragic news when the singer of SOUNDGARDEN, Chris Cornell, was… He passed away. I'm not gonna get into why that happened, because it's not even my business, but the fact is it was deemed a suicide. It is very tragic. I'm sure there's people in this room that have been affected by that. I have — my dad committed suicide in 2014 — so it's rough. And so this next song… We decided to try to honor Chris Cornell and his family and the millions of people around the globe that have been touched by him and his music and his amazing voice — amazing voice; very unique. His music lives on beyond all of our time. And so we threw this together, literally. We're gonna give it our best attempt. We had about three hours to try to learn this song to try to perform for you. It's something that we don't [usually] do. But our hearts go out to the band and his memory and his family. I'm sure many of you know this song, so please sing along, won't you? Yes, I have a couple of 'cheat sheets,' but we wanted to show the most respect we could in a short amount of time."

In the days since Cornell's tragic death, a number of artists have paid tribute by covering his songs, including MEGADETH, DREAM THEATER, STONE SOUR, LIVE, THE PRETTY RECKLESS and HEART's Ann Wilson.