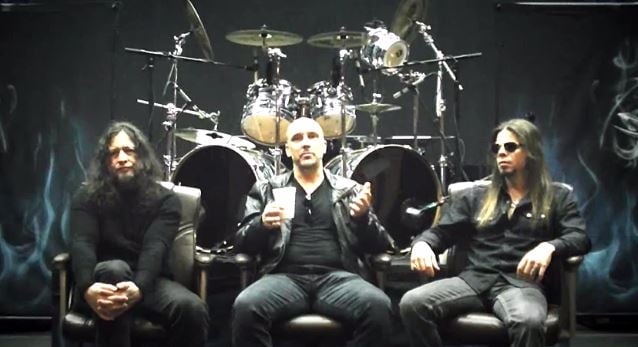 Mick McDonald of National Rock Review conducted an interview with QUEENSRŸCHE members Michael Wilton (guitar), Scott Rockenfield (drums) and Todd La Torre (vocals) before the band's November 22 concert at Island Resort & Casino in Harris, Michigan. You can now watch the chat below. A couple of excerpts follow (transcribed by BLABBERMOUTH.NET).

On QUEENSRŸCHE's attempt to raise $2 million by selling stakes in what the band's attorney called a "new holding company for all things QUEENSRŸCHE" that will receive the revenues from its tours, merchandising, album sales and digital downloads:

Rockenfield: "We've been a band a long time, and we're always looking for ways to engage with our fans over the three-plus decades that we've been doing things together. There are so many great opportunities out there, and the Internet has certainly become one of those mediums of being able to engage and communicate and have fun with the fans, and Pledge is a great platform for that. We started writing the new CD — in the last year, we've been working on music and looking at what we're gonna do with it — and during the process, we just started brainstorming on ways that we could get the fans to come in, engage with us, support the launch of the CD when the time comes, and just kind of offer that type of thing. And so we did."

Wilton: "QUEENSRŸCHE is all about evolving; we're always evolving as a band. That being said, technology is always changing. We've been doing this a while, and we've seen the technology advances that have happened in the last 10-20 years, and we're embracing this new technology. It's PledgeMusic. It's a different avenue for bands to get what they want, because, let's face it, record companies aren't giving huge advances, and this gives them a chance to build upon their aspirations, their dreams, whether it's funding a record, or it's funding a book, or it's funding a gig, it's just a whole new technology that we're embracing."

Rockenfield: "In the process of the Pledge thing and our discussions about it, and then getting to the point of really wanting to launch something like that was also the discussions we had about just the band in general and the brand of QUEENSRŸCHE that Michael and Eddie [Jackson, bass] and I have been around with for 35 years. You know, what could we do with that that would be interesting? And that's where really the bigger thing opened up for us about offering, actually, an investment opportunity in the brand of QUEENSRŸCHE. So we did; we thought it was a great idea. As far as we know, I don't think it's ever been done in the music industry at this point. So, once again, it was a much higher level of a way for us to kind of open up what QUEENSRŸCHE is and have people come in that are interested to actually own a part of what we do as QUEENSRŸCHE. And we associated that with the whole Pledge thing, and it was just kind of a big launch of, once again, engaging and working with the fans and just enjoying the process of doing all that stuff. And so far, it's been a great ride, it's extremely exciting, we've got a lot of great feedback, and there's a lot of things going on with it. And we're just [running] it and having fun."

La Torre: "Real quick, though, I wanna add to what they're saying… The PledgeMusic aspect of it is really a limited-time, kind of an extension of our merchandise that we carry. So I just wanna make clear, that everyone knows, that when they buy some of those packages, it's not a Kickstarter [campaign] to bankroll the record. I've seen some rhetoric about that; it makes it look like we're trying to raise money to finance an album. We are not — that's not the case. The record's coming out through Century Media, it's funded that way, just like the last record. So I don't want people to think that we're trying to sell merchandise to fund an album. We're offering unique bundles and packages that are exclusive, for a limited time, as a creative way to offer something to the fans and supporters and, to kind of piggyback on what Michael said, you have to be creative with ways that you can also generate some income. So they're getting something, a commodity, for a monerary value. It's not, like, 'Donate, and then we'll put this out.' It's to enhance the process. So I wanna make that very clear. They're just clever, unque, fun ways to engage with the supporters. I mean, I wish that when I was growing up, if IRON MAIDEN… if I could go hang out in the studio for the day with IRON MAIDEN, I mean, who wouldn't wanna do that? And honestly, they're really relatively priced, when you consider what's out there and the demand and whatnot. On some of the items, there are limited capacities. We have private things where you can spend the day with the band. Things like that."

On whether they feel more in control of their destiny than they have in the past:

Rockenfield: "That depends on what day and where you wake up at, I suppose."

Wilton: "I don't think anybody really knows what's going on and the destiny, especially in multimedia and especially the record industry. I mean, it's en enigma. It's changing so fast that it's hard to keep up with what's going on."

Rockenfield: "Listen, it's work; what we do is constant work. We all have to wake up and brainstorm and have discussions about what are we going to do today and we've gotta project for the future and you've just gotta be smart, and hopefully try to control things that you can do and come up with unique ways to do it and have fun and then keep moving forward. 'Cause if you sit around idle and don't work and all that, the world will just bypass you. I mean, it doesn't work like that. Back in the early days, you had all these people and their money being thrown around and you had ten-year-long record deals and things would happen for you because you had massive amounts of people surrounding you doing it. But these days it's a little more streamlined, so we try to streamline it and just move forward. We try to be smart, but work every day. It's hours and hours of work; this is not just a glorified rock and roll lifestyle. It's a job and it's a lot of work. But it pays off and it's a lot of fun."

La Torre: "Sometimes people say, 'Why don't you play here?' And there are so many variables that, it's, like, we would love to play there, but at the end of the day, it is a business and this is how we work an income, and if it's not financially feasible to fly eight people to a location for whatever that market is calling for at the time, there are so many things that you have to juggle around for it to make sense. Yeah, we can play there, but it might be 60 bucks a ticket, or 80 bucks a ticket, and we feel that that's not right. It has to all make sense, so, yeah, it's trying to make smart decisions. We wanna play the best venues and play to all the crowds that we can, but it's… There are places that we play because it's work. It doesn't mean we don't love it. But it's definitely… These guys, obviously, have way more merit because of the history they have professionally doing this. I don't. But I've been playing my whole life and played for a living for a number of years, and it's a really tricky, it's a really hard thing…"

Wilton: "It's hard because everybody's doing it. That's how they're making their bread and butter. The winter time is kind of the prime time to tour, even though it's a pain in the butt. But summertime every band is out touring. It's all about… There's more money being made touring than there is selling music."

Rockenfield: "You can't sit around anymore and watch your platinum records just go through the roof on the charts and the checks are rolling in. That landscape is gone, unless you're some of the very few that are out there doing things like that. But for us, like Michael's saying, and Todd, it is getting out in the world and performing."