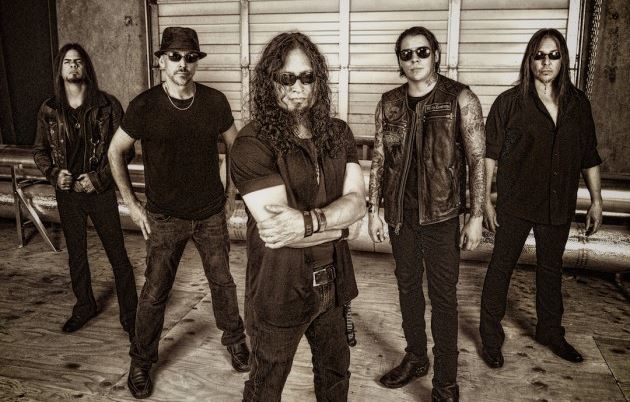 QUEENSRŸCHE's new song "Hellfire" can be streamed below. The track is taken from the band's new album, "Condition Hüman", which will be released on October 2 via Century Media. The CD was recorded in part at at Uberbeatz Studio in Washington with producer Chris "Zeuss" Harris, who has previously worked with ROB ZOMBIE, HATEBREED, SOULFLY and SHADOWS FALL. "Hellfire" is also the iTunes instant grat track available immediately upon pre-order purchase.

Singer Todd La Torre tells Billboard.com: "Each song individually is its own story, which does not have to directly relate to the next song. However, each song is harmonious to a larger picture, which is the human experience, mortality and how each of us perceives the world around us based on our own observations and experiences, thus shaping human behavior."

Adds drummer Scott Rockenfield: "This record [is], 'Wow, OK, now we know what we can do together.' We know we have chemistry with Todd, and we wanted to take the band even one step further, which was really dig into everything that we know that we're doing and that we have fun doing, and pull out all the stops, I guess, in a way of things we didn't really visit on the first record [with La Torre]. We wanted to dig deeper more into the elements of QUEENSRŸCHE."

Regarding the more aggressive musical direction of "Condition Hüman" compared to that of 2013's "Queensrÿche", Rockenfield said: "Our fans love metal, and we've been pretty good at doing metal in our past, so [we thought], 'Let's have fun with some of that again. Let's do it and see what it means for us.' We definitely had conscious discussions about it, and now that we have Todd, Todd loves metal, so it was easy to have that conversation about pushing the band in a little bit of that direction."