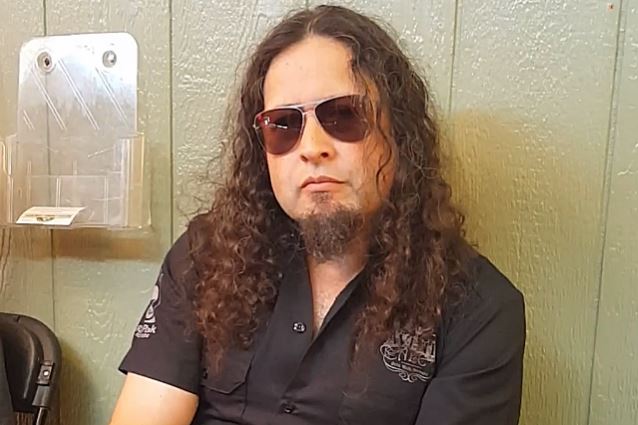 The End Hunger Challenge Project conducted an interview with QUEENSRŸCHE guitarist Michael Wilton on July 23 at the Moondance Jam in Walker, Minnesota. You can now watch the chat below.

Asked to recount his best "Spinal Tap" moment, where everything almost fell apart or flopped for the band, Wilton said: "Wow, there's been so many. But I'll tell you one that, it's not really 'Spinal', but, to me, it was kind of 'Spinal'. We were to perform at the Grammys, the song 'Silent Lucidity' with a 40-piece orchestra. And you have in between commercials to get set up behind the stage. So there's a lot of musicians plugging in their instruments, and they get to me, and [there was] nothing [coming out]. And so [I heard the production people say], 'We're not getting the stage-right guitar player's guitar.' And so everybody's looking at me. The curtain is ready to open. I'm on live TV with nothing. And I'm just going, 'Hold it together. Hold it together.' And, you know, my bandmates are just glaring at me like it's my fault, and it wasn't. So, anyway, the curtain starts opening, and one of the technicians comes [over and says], 'Oh, we had it plugged in the wrong hole. So you're good to go.' [The curtain] opens, and I was sweating bullets. And the crowd out there never knew [what had just happened]. That was, like, my ultimate 'Spinal' moment."

QUEENSRŸCHE will embark on a month-long headlining tour of the United States in November. Support on the trek will come from ARMORED SAINT and MIDNIGHT ETERNAL.

QUEENSRŸCHE will enter the studio in January 2017 to begin work on the follow-up to "Condition Hüman".