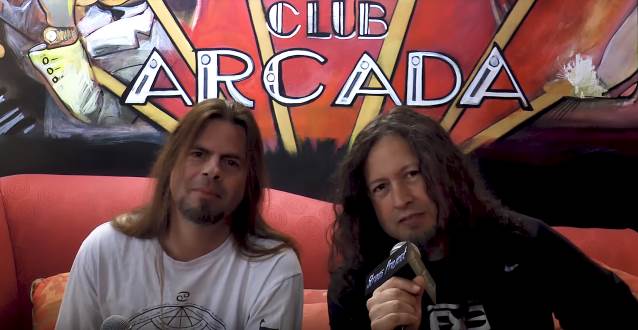 Straus Project conducted an interview with QUEENSRŸCHE guitarist Michael Wilton and vocalist Todd La Torre on June 22 at Arcada Theatre in St. Charles, Illinois. You can now watch the chat below.

Todd, who has been wearing a cast on his arm at some of QUEENSRŸCHE's recent shows, began by explaining how he sustained the injury. "I was working on my bike, motorcycle, and trying to break a bolt loose," he said. "The wrench came off and, basically, slammed the concrete as hard as you could punch the wall, pretty much. So I broke the fifth metacarpal bone, which is this bone right behind the knuckle. So my hand is what broke. And I finally got that gnarly cast off two days ago, so I have a brace on right now, and I have to start rehab. It's very slow healing process and it's super frustrating."

Todd went on to say that his injury has limited him somewhat in terms of what he can do on stage. "Yeah, I try to not wear the sling," he said. "I mean, naturally, if you wanna grab the mic — I've been using the mic stand more. But just normal moving your arms around, I can't do that — it kills. So I'm just owning it like my hand's broken. If Dave Grohl can sit on a La-Z-Boy [chair] with a broken leg, I can deal with a broken hand and a cast or an arm sling. So hopefully within the next three or four weeks, I'll have another checkup, and then I have to start rehab, like, [as soon as possible], so that the scar tissue doesn't build up, preventing me from ever really moving these fingers again. It's been rough, but I'm doing the best that I can to perform and not let it be a hindrance."

Todd and Michael also offered an update on the progress of the recording sessions for QUEENSRŸCHE's upcoming follow-up to 2015's "Condition Hüman" album, with the singer saying: "It's still in the final mixes, and it'll be mastered by Chris [Zeuss] Harris."

"It's 99 percent [finished]," added Wilton. "[We're adding] little touches that always happen at the end of a project, but the bulk of it is done. All the instruments are played, and just a few little fixes here and there — nothing drastic or anything. But we're really, really happy and proud of this album; it's really got something special."

As for the musical direction of the new QUEENSRŸCHE material, Michael said: "It's eclectic in a sense that all the songs are their own little personalities. But, yeah, definitely this one turned out to have more octane on it."

Added Todd: "I think it sits in the right place [in terms of] my evolution of the band with me in it. I think this feels like a natural, and it sounds like the natural next record. It's driving, but there's still that diversity in some of the songs that maybe a little curveball, but… Yeah, it just feels like the next logical musical [step]."

Continued Michael: "The chemistry of the band is jelling. It's at that point [where] we know each other better, we work together better. And the whole project — I mean, even Zeuss, the producer, he's more comfortable with the band; he knows how we write. So this album, I think, even though the songs came from scattered demos, we really put something together all as a band. And I'm really surprised and really happy with this album."

Asked if QUEENSRŸCHE made a conscious decision to get heavier on the upcoming album, Michael said: "It's just… it's the DNA. I don't know… Getting older, I wanted to have that energy still. I don't wanna write mellow music all the time."

Added Todd: "I think also, [Michael] and I, we've talked about it, when you're writing songs, it's just each song at a time, and then when you have all of the songs that make the final cut — like, 'Okay, we think these will be the ones for the record' — when you're listening to 'em back, you're, like, 'Okay, that's midtempo. That one's kind of slow. Okay, that's a fast one.' And we were doing the track placement of the last one ['Condition Hüman'], when we were trying to figure out what flowed good, we were, like, 'Okay, we need another fast one.' And we were, like, 'I don't think we have one. Is there another fast one?' And so when we came into this, the only thing, I think, we were a little bit more mindful of was, on the last record, we remembered that we wanted some more driving tunes, and so I think only in that respect, maybe the initial songwriting from Michael or Eddie [Jackson, bass] or me or Parker [Lundgren, guitar], whatever, kind of had that implanted in our minds — like, 'Let's write something a little more uptempo,' because the last time, we were missing that, and we wanted this one to showcase a little bit more of that."

Continued Michael: "And plus, the evolution of music for QUEENSRŸCHE is we're live… we're on the road all the time, and that consumes our life. So I think a lot of that is kind of generated in these songs. 'Okay, let's keep the three-dimensional QUEENSRŸCHE artistic way of doing it, but let's also view these as we're probably gonna play these live a lot.'"

Said Todd: "That's something else we've been… We've been very mindful of the supporters of the band [telling us], 'Play newer stuff.' And we've been doing so many fly dates and this and that, [where] you're home for two or three days and then you're on a plane again, and it's been hard to rehearse new stuff as a band. But, for the record, we are working on implementing more 'Condition Hüman' songs into the set. Actually, the last two that I did, and then working on some new stuff. So when that's released, we really want to incorporate newer material into the setlist. It's hard, because you have quite the discography, and [some] people are, like, 'Oh, we've heard the first five, six albums, yeah, yeah, but we wanna hear the new stuff.' And although we love that, at the same time, there are the people that they really wanna hear the classics. So finding that balance has been really hard. But we've all made the decision, and we've been working on kind of relearning those things. 'Cause once we've recorded 'em, it's not like you're together and playing all those songs that we recorded. So we're gonna be doing that. I think at soundcheck today, we might even play with some 'Condition Hüman' material to start incorporating into the set in the very near future."

QUEENSRŸCHE's next album is tentatively due in February 2019 via Century Media.

For the past 14 months, QUEENSRŸCHE's founding drummer Scott Rockenfield has been taking time off from the band's touring activities to spend time with his young son, who was born in February 2017. Filling in for him is former KAMELOT drummer Casey Grillo.

QUEENSRŸCHE has not indicated if Rockenfield was involved with the making of the band's new disc. However, the group did confirm that Grillo did not play on the record, which will mark QUEENSRŸCHE's third full-length release with La Torre, following the departure of Geoff Tate in 2012.