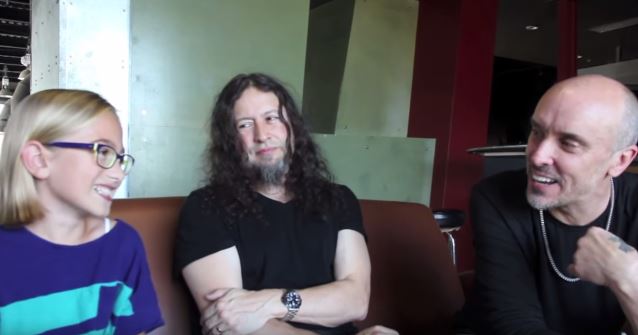 Piper of KidsInterviewBands.com conducted an interview with QUEENSRŸCHE guitarist Michael Wilton and drummer Scott Rockenfield on September 21at the LC Pavilion in Columbus, Ohio. You can now watch the chat below.

QUEENSRŸCHE's new album, "Condition Hüman", will be released on October 2 via Century Media. The CD was recorded in part at at Uberbeatz Studio in Washington with producer Chris "Zeuss" Harris, who has previously worked with ROB ZOMBIE, HATEBREED, SOULFLY and SHADOWS FALL.

Regarding the more aggressive musical direction of "Condition Hüman" compared to that of 2013's "Queensrÿche", Rockenfield told Billboard magazine: "Our fans love metal, and we've been pretty good at doing metal in our past, so [we thought], 'Let's have fun with some of that again. Let's do it and see what it means for us.' We definitely had conscious discussions about it, and now that we have [singer] Todd [La Torre in the band], Todd loves metal, so it was easy to have that conversation about pushing the band in a little bit of that direction."