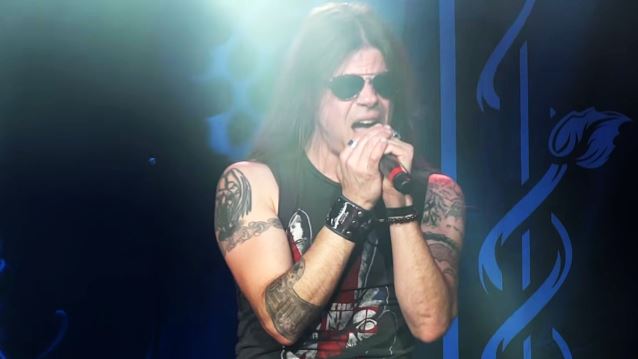 QUEENSRŸCHE's Scott Rockenfield spoke to Gary Graff of Billboard.com about the progress of the songwriting sessions for the band's next studio album following the settlement agreement between the band and its former lead singer, Geoff Tate, over the rights to the QUEENSRŸCHE name which gave the moniker to the drummer and his bandmates Eddie Jackson (bass) and Michael Wilton (guitar).

"We've been deep into the writing mode for the last couple months, putting together music and getting ready to at some point in the future drop into the studio and start putting together the thing for real," Rockenfield said. "We have a bunch of new material we've working on the last two years, since we rolled in with [new singer] Todd [La Torre], stuff we've been digging deep and working on longer than just the last few months."

According to Rockenfield, QUEENSRŸCHE feels rejuvenated after its split with Tate and it feels like a new chapter has begun with the addition of La Torre.

"There's this massive energy going on," the drummer told Billboard.com. "The cool thing is we found out we made the right decision. The band was not in a good place and we weren't happy as musicians. We needed to take control back, and we did. Last year's record was a massive defining point for us. It feels like we've been set free, like a bird let out of the cage and ready to fly and just go everywhere. We're able to now do so many things we'd been held back from doing, which feels great."

Jackson, Rockenfield and Wilton bought out their former lead singer's share of the QUEENSRŸCHE corporation while allowing Tate the ability to be the only one to perform "Operation: Mindcrime" and "Operation: Mindcrime II" in their entirety. Tate will no longer have use of the TriRyche logo or any other album images aside from the "Mindcrime" releases. He can only refer to himself as the "original lead singer of QUEENSRŸCHE" or "formerly of QUEENSRŸCHE" for a period of two years and that text must be at least 50 percent smaller than his name in all materials. After this two-year period passes, he can only refer to himself as Geoff Tate with no mention of QUEENSRŸCHE at all.