QUEENSRŸCHE's twelfth studio release, the epic concept album "American Soldier", will be available from Atco/Rhino on March 31 for a suggested list price of $18.98 (CD) and $9.99 (digital). The ambitious album encompasses a dozen songs inspired by numerous interviews with veterans conducted by Geoff Tate, the group's singer and chief songwriter, who was intent on telling their story using their words. After speaking with soldiers who served in various conflicts — from World War II to Iraq — Tate turned their firsthand experiences from the frontlines into an unflinching musical examination of the life of a solider and the consequences of war.

"We began the project that would become 'American Soldier' right after 'Mindcrime II' was released," says Tate. "The process started with a conversation with my dad. He was a career military man, with the Marines in Korea and an Air Force tour of duty in Vietnam in '68. He was with the Air Force my entire life — I was born on a base in Germany — and when he retired he ended up taking a job with the Navy. He had never talked about his experiences in war, and all my life I've been asking questions and waiting for the stories that I never heard. These past couple of years he started talking, and I taped one of the conversations. That was the beginning."

"American Soldier" is more than a concept album; it is a statement of mission, a revelation of purpose, and a march for understanding. One thing that it is not is political. "People have a tendency to misconstrue the difference between political and social issues. This record is not political at all," affirms Tate. "It's very much a statement of the soldiers; it's where they are at and what they have experienced. I hope the album, as a whole, is a statement that can get them talking to each other and begin that process of connecting that needs to happen between people."

To make that statement, Tate interviewed dozens of enlistees and veterans, the oldest having served in World War II and the youngest still in active duty in Iraq, with every American war in between represented. For an artist accustomed to writing from personal experiences, the lyrical process for "American Soldier" proved an invigorating challenge. "This was one of the more challenging records for me to write, lyrically, because I am not involved in the songs. It is not about me, and it's not about how I feel," he says. "It is me interpreting stories from the perspectives of the soldiers and putting their words into lyric form, retelling the story in the most honest way that I could.

"As an artistic statement, I'm very happy with this album. I think we've said what we want to say and we've done it in a way that is respectful to the people that are involved," he continues. "I hope that people talk about it and debate about it, and I hope it rubs some people the wrong way, because that rub is what inspires conversation. That's what art should do."

"American Soldier" was written by Tate and producer Jason Slater, along with drummer Scott Rockenfield, and contributors Kelly Gray and Damon Johnson. Slater returns to the QUEENSRŸCHE creative process in the same capacity that worked for the band with the writing and recording of "Operation: Mindcrime II", which was released in 2006 and debuted at #14 on The Billboard 200, selling more than 40,000 records in its first week. The album was QUEENSRŸCHE's highest chart debut since "Promised Land", in 1994. Both "Promised Land" and "Operation: Mindcrime" (1988) have been certified platinum, selling more than one million albums each in America alone, and "Empire" (1990) has reached triple-platinum status. The band's first three albums–their self-titled EP (1983), "The Warning" (1984), and "Rage For Order" (1986) — have all been certified gold, selling more than 500,000 copies each.

In a first for QUEENSRŸCHE, all of the guitar tracks on "American Soldier" were recorded by Michael Wilton.

With "American Soldier", QUEENSRŸCHE's epic career continues, proving yet again that the only thing that can rival the band's music is their vision. As Geoff Tate's father says in the chilling introduction to "The Voice", the album's closing track, "You reap what you sow…"

A snippet of the song, "If I Were King" is featured in the new tour commerical for Snoqualmie Casino. 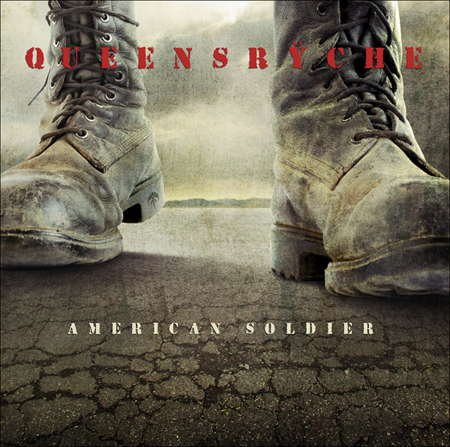 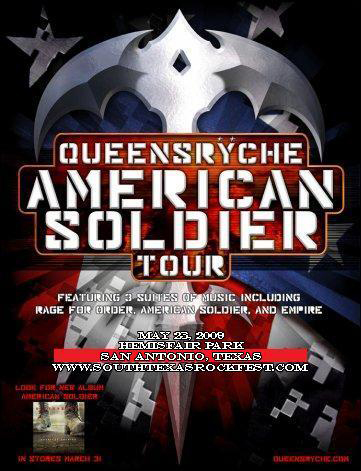