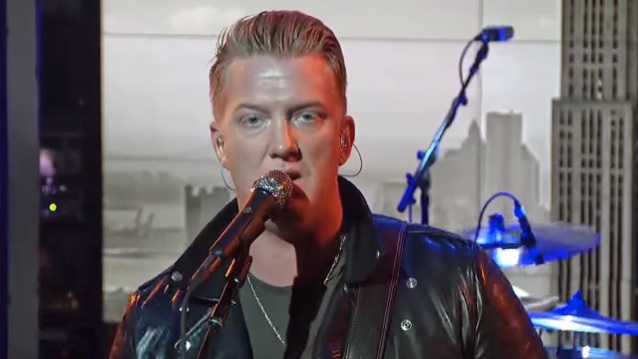 According to The Pulse Of Radio, QUEENS OF THE STONE AGE singer/guitarist Josh Homme has spoken out about how late AC/DC guitarist Malcolm Young — who died earlier this week — inspired him when he was first getting the QUEENS off the ground. Homme explained to Mojo that after leaving his previous band, KYUSS, he spent some time with SCREAMING TREES where he tried to emulate Malcolm's style of playing.

Homme recalled: "I wanted to see what it was like when you just played one thing until you got lost in a trance. One note is so much more difficult than 50. That’s what I learned in [SCREAMING TREES], because I was playing rhythm, I was trying to play like Malcolm Young, trying to play a riff like a robot."

Homme added that he ditched the "robotic" sound after his sound man introduced him to German bands like CAN and British post-punk acts such as WIRE.

He said: "I had the first QUEENS record written, this robotic trance stuff, and then my friend Hutch, our soundman who has turned me on to so much music... plays me CAN, NEU!, WIRE... I was like, 'What?' Really disheartened."

Malcolm passed away last weekend at the age of 64, after battling dementia and other health issues for several years. His death led to a wave of tributes from artists including Dave Grohl, Tom Morello, FOZZY's Chris Jericho, Eddie Van Halen, Slash, Ozzy Osbourne, Paul Stanley, Lars Ulrich, SHINEDOWN and many, many others.

QUEENS OF THE STONE AGE are touring in support of their seventh studio album, "Villains".