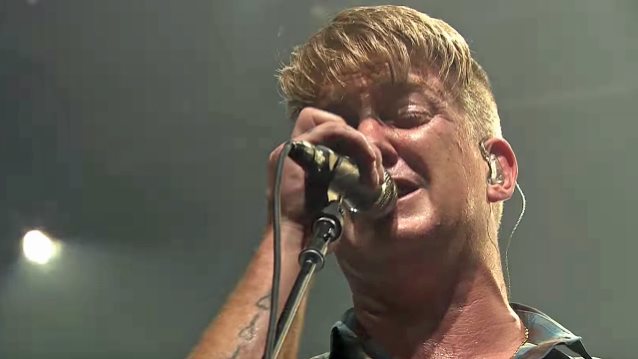 According to The Pulse Of Radio, QUEENS OF THE STONE AGE frontman Josh Homme has been using a cane recently and told NME that he aggravated a longstanding knee injury while filming the band's video for its current single, "The Way You Used To Do". Homme had what was supposed to be routine surgery on the knee back in 2010, but was stricken with an antibiotics-resistant staph infection after the procedure that almost claimed his life and left him bedridden for several months.

He described working through the pain during the eighteen-hour video shoot, explaining: "I tore my leg up in the morning [but] I didn't want anyone to know because then they would, like, try to baby me. I can bite my lip, so I just did that a lot. We had to cancel a show which I really don't like doing, you know, everyone cancels if their finger hurts."

He recently underwent another surgical procedure for the injury, which forced the band to cancel their appearance at the Outside Lands festival in San Francisco.

The singer and guitarist used to fall ill frequently while touring, telling The Pulse Of Radio a while back that he tries to stay healthy on tour even though that lifestyle isn't conducive to it. "I just try to do my thing and try to hope that it is something that will encourage good health, although I know I'm totally bullshitting myself."

QUEENS OF THE STONE AGE will embark on a North American tour in support of its latest album, "Villains", beginning September 6 in Port Chester, New York and wrapping up on October 24 in New York City.

"Villains" was released on August 25 via Matador.