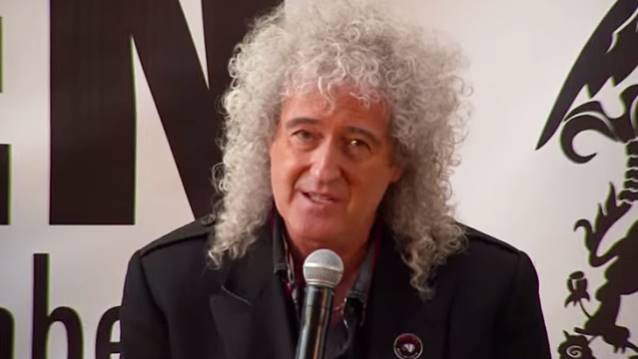 May and QUEEN drummer Roger Taylor recently put finishing touches on some of Mercury's 1983 demos with Michael Jackson. In addition to that, the other "lost" Mercury tracks in the QUEEN vaults include collaborations with David Bowie, Andy Gibb, and Rod Stewart.

Speaking to BBC Wales on May 23, May said (hear audio below): "We found a few more tracks with Freddie singing and all of us playing, and they are quite beautiful. So people will be hearing this work towards the end of the year. We are gonna put out an album which probably is called 'Queen Forever'. And it's a compilation, but it will have this new material which nobody in the world has ever heard. I think people will really enjoy it."

Asked to describe the unreleased tracks featuring Mercury, May said: "Most of it comes from the '80s when we were in full flight. So it's is quite emotional. It is the big, big ballads and the big, big epic sound. It wouldn't have been if we hadn't have done this restoration job. We had to start from scratch, because we only had scraps. But knowing how it would have happened if we had finished it, I can sit there and make it happen with modern technology. And we have Pro Tools these days; and you can do almost anything in Pro Tools."

QUEEN will return to North America for a 24-date arena tour with "American Idol" finalist Adam Lambert once again fronting the band. The 2014 dates begin on June 19 at Chicago's United Center and wind down on July 28 at Toronto, Ontario's Air Canada Centre.