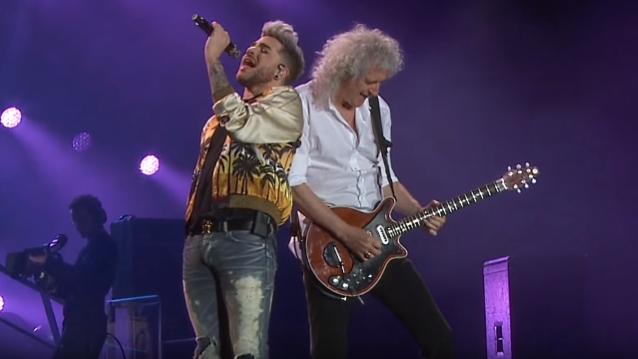 Brian May spoke to Guitar World magazine about the experience of having legendary singer Paul Rodgers front QUEEN between 2004 and 2009 and how it compares to working with Adam Lambert.

"They're both great, of course," the QUEEN guitarist said. "We had a fantastic time with Paul. He has his own style, which we integrated into the band. But what happened was, there was a meeting point where we wanted to go deeply into his music — we were influenced by it in the first place. For me, it was a joy to play 'All Right Now', 'Can't Get Enough Of Your Love' and all those things.

"It became difficult as time went on, though," May admitted. "We would play South America, where people didn't know that music, so we played more QUEEN songs. Paul dealt with it well, but I think it was hard for him to abandon a lot of his material. We really enjoyed it as an experiment, but as an experiment it had… limits. Eventually, we thought, 'It's probably gone as far as it can. Paul needs to get back to his own career.' Because he couldn't just go on being the frontman of QUEEN. By mutual agreement, we thought, 'That's it.'

"Now, with Adam, it's a different story, because Adam can do all the stuff that [late QUEEN singer] Freddie [Mercury] did and more. It doesn't matter what you throw at Adam — he can do it. He can do 'Good Old-Fashioned Lover Boy' [from 1976's 'A Day At The Races'], which we wouldn't dream of throwing at Paul Rodgers, because it just wouldn't work. With Adam, it's a different kettle of fish. He's a born exhibitionist. He's not Freddie, and he's not pretending to be him, but he has a parallel set of equipment. He knows how to deal with an audience. He teases and taunts an audience quite naturally, without thinking about it. He loves to dress up. Although Paul did dress up a bit for us. We got a lot of sequins on him. [Laughs]

"Adam lives and breathes that stuff," Brian added. "Adam is style, and that's not to say he's not content as well. He's a born rock star and frontman, so it's a very vibrant relationship we have with him. We treat Adam exactly the same as we treated Freddie in almost every way."

Rodgers recently described his stint with QUEEN as "a wild ride." He told SiriusXM's "Trunk Nation": "It came out of the blue. When Brian asked me if I wanted to do a couple of shows just for fun in Europe, I was pretty taken aback. And I must say my first reaction was, 'Well, I really don't see that.' But then I said to myself, 'Well, it's a challenge. Let me see if I can do it. Maybe I'm chickening out here.' So I did it. And it turned into four years, actually. We toured all over the place. We toured the world twice, and we finished off with a studio album of all-original material. So it was a wild and crazy ride, as they say. And we are still friends, and I love the guys."

With Rodgers at the mic, QUEEN embarked on two world tours and released an album, "The Cosmos Rocks", in 2008. They amicably parted ways a year later when Rodgers returned to BAD COMPANY.

"When I sort of joined forces with [QUEEN], they were not touring," Rodgers recalled. "They were doing one-off gigs — they were big one-off gigs, but they weren't touring. And with me, what we did [is] we went out… They wanted to play 50 percent of their music and 50 percent of mine, and I said to them, 'People haven't seen QUEEN live for a long time. We should make it QUEEN heavy.' So we did four or five of my songs… But it was great. It was good."

Rodgers has said in previous interviews that he performed all of the QUEEN songs in the late Freddie Mercury's original keys. "A lot of people drop the keys," Paul said. "But, to me, the challenge was to do this material the way it was done, but in my interpretation of it."