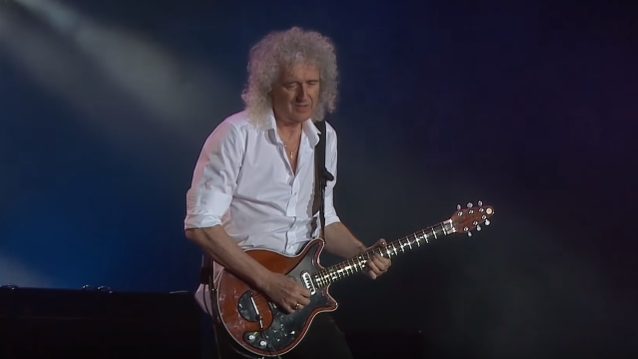 "Bohemian Rhapsody", the iconic single by British rock legends QUEEN, has become most-streamed song from the 20th Century, as well as the most-streamed classic rock song of all time.

On Monday (December 10), Universal Music Group (UMG) announced that the song has garnered more than 1.6 billion global streams — a figure that takes into account all registered streams on global on-demand streaming services such as Spotify, Apple Music and Deezer, as well as streams from official song or video streams on YouTube.

In taking the top spot, the song pulled ahead of NIRVANA's "Smells Like Teen Spirit", GUNS N' ROSES' "Sweet Child O' Mine" and "November Rain", and A-HA's "Take On Me".

"Bohemian Rhapsody"'s popularity has been boosted by the recent success of the QUEEN movie "Bohemian Rhapsody", which became the highest-grossing music biopic in history five weeks after its release. The film has already grossed more than $596.1 million at the global box office.

QUEEN guitarist Brian May said in a statement: "So the River of Rock Music has metamorphosed into streams! Very happy that our music is still flowing to the max!"

Lucian Grainge, chairman and CEO of Universal Music Group, said: "'Bohemian Rhapsody' is one the greatest songs by one of the greatest bands in history. We are so proud to represent QUEEN and are thrilled to see the song still inspiring new fans around the world more than four decades after its release. My congratulations to QUEEN and [longtime manager] Jim Beach on an incredible achievement that is a testament to the enduring brilliance of QUEEN."

"Bohemian Rhapsody" was first released as a single on October 31, 1975. Despite its unconventional structure and exorbitant length for a single, it became QUEEN's first Top 10 hit in the U.S. In the U.K., it went to No. 1 for nine consecutive weeks, a record at the time. The song revisited the charts 16 years later, when it appeared in the 1992 comedy "Wayne's World", starring Mike Myers and Dana Carvey.