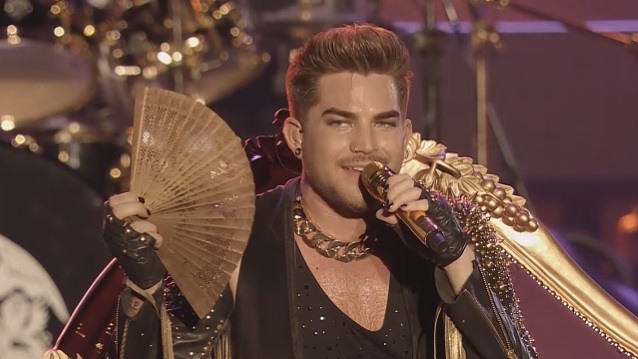 On May 7, QUEEN + ADAM LAMBERT frontman Adam Lambert participated in a "BUILD Series" question-and-answer session with host Kevan Kenney in New York City. You can now watch the discussion below. A couple of excerpts follow (transcribed by BLABBERMOUTH.NET).

On whether he had any trepidation about stepping into the role of lead singer for QUEEN as the replacement for Freddie Mercury:

Adam: "It was definitely something that crossed my mind and it was something that was discussed. I was, like, 'Is that crazy for me to do it? Is it career suicide for me to even try this?' And we kind of looked at [QUEEN's 2011 performance at the] EMAs [MTV Europe Music Awards] as sort of, like, testing the water a little bit. And truthfully, online, it was a mixed reaction. Some people loved it, some people were, like, 'How dare you?' Which I took as a dare to keep doing it, 'cause I'm that kind of guy. I was, like, 'Okay. I'll do better next time.' And I think that pressure and that expectation from fans around the world of QUEEN and what they expected, that pushed me to be even better and to grow."

On the fine line between impersonating Freddie Mercury and channeling his spirit:

Adam: "That was one of the big things that intimidated me about this, because Freddie was such a killer vocalist. So I had to figure it out. I'm, like, 'Well, how do I do this without mimicking him?' Obviously, the reason why I know these songs and the reason why the entire audience knows these songs is because of the records that they put out. I decided really early to stop listening to the records, the originals, because then I would start imitating him. And I started trying to look at them as songs as opposed to recordings, if that makes sense. So I worked with the piano player, Spike. I had him play some stuff for me. I put it on tape so that I could rehearse just with the instrumentation a little bit more and find my own kind of swag on it. And sometimes I definitely can't avoid, because why should I? But then, to a point, it's also really important to kind of make sure I'm doing it from my own body and my own heart. I don't know how to explain it. It's weird. 'Cause it's not something that was an immediate click for me; I kind of had to discover that, discover the balancing point."

On what is unique about the Las Vegas audience that makes QUEEN's upcoming residency so perfectly timed:

Adam: "Well, I think that the standard now in Vegas is really high. Look at all the Cirque [Du Soleil] shows; they are breathtaking to watch. A lot of artists are going… both heritage acts and current pop artists are doing residencies, are doing tours that go through there, so I think the bar is really high for quality there now. And I think for us, as a collaboration, I think we've raised the bar on the visual side of things on this last tour, and now it feels like we're sort of in that wheelhouse that Vegas is going to expect."

On how he approaches a Las Vegas residency as opposed to a typical tour date:

Adam: "Obviously, we're in this space for three weeks — we're doing ten shows over the three weeks — so it's the first time we've ever done that many shows in one venue before. We've done maybe two, maybe three somewhere along the way there. But I think it'll just give it a different energy for us to be really comfortable. When you're on tour, you walk into a new venue and it sounds different, and you have a whole new audience there, you're in a different city, there's different flavor in the city or the weather or whatever. This will be consistent. So I think it'll allow us to play more, I think it'll allow us to experiment a little bit more, 'cause we're gonna be really comfortable."

Tickets ranging in price from $79 to $350, as well as a limited number of on-stage seats, not including applicable service charges, are on sale at Ticketmaster.com.

QUEEN + ADAM LAMBERT's magnificent 2018 live show has been custom tailored for the band by some of the world's most cutting-edge creative talents. Responsible for design and production is Ric Lipson from Entertainment Architects Stufish Productions, renowned worldwide for their innovative work with artists such as PINK FLOYD, THE ROLLING STONES and U2, as well the opening and closing ceremonies of the 2008 Beijing Olympics.

Making use of over 300 moving lights during the show is the highly acclaimed lighting designer Rob Sinclair, who has illuminated tours for major artists including Adele, Peter Gabriel and Kylie Minogue. The production's genuinely eye-popping laser elements are the work of ER Productions, behind both the opening and closing ceremonies of the 2012 London Olympics and seen by over 900 million people worldwide. 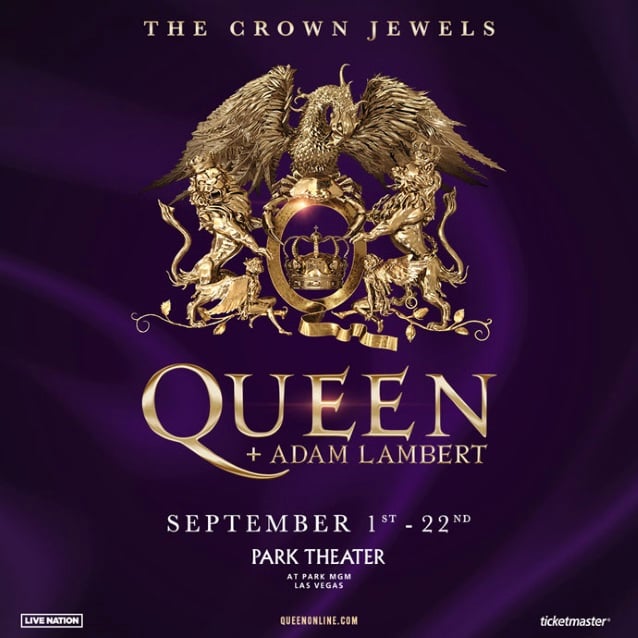