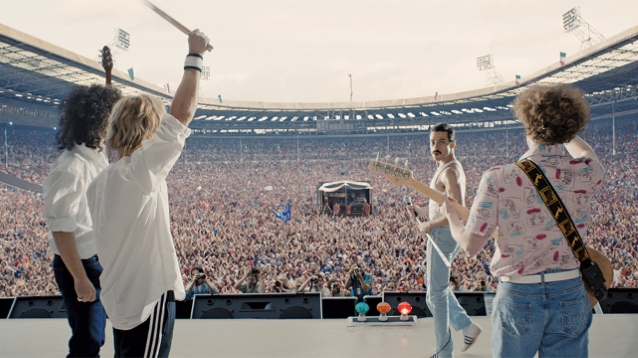 A side-by-side clip of the "We Will Rock You" performance as part of the Live Aid re-enactment from QUEEN's biopic, "Bohemian Rhapsody", can be seen below.

As previously reported, "Bohemian Rhapsody" is coming to digital platforms later this month, with the 4K Ultra HD, Blu-ray/DVD release set for February.

According to 20th Century Fox, "Bohemian Rhapsody" will be available on digital HD on January 22, with the physical release scheduled for February 12. All of the releases will feature the full Live Aid performance, featuring Rami Malek (as singer Freddie Mercury), Ben Hardy (as drummer Roger Taylor), Gwilym Lee (as guitarist Brian May), and Joseph Mazzello (as bassist John Deacon) recreating the original 22-minute 1985 Wembley Stadium show. The home video release will include two never-before-seen songs, "Crazy Little Thing Called Love" and "We Will Rock You", as part of the Live Aid re-enactment. The 4K and Blu-ray releases will also feature several featurettes, including "Rami Malek: Becoming Freddie", "The Look And Sound Of Queen" and "Recreating Live Aid."

"Bohemian Rhapsody" director of photography Newton Thomas Sigel told Film School Rejects that he was determined to put his audience on the stage with Rami Malek while recreating QUEEN's iconic Live Aid set.

"Live Aid was recorded and was broadcast on 13 satellites by the BBC, so the actual performance exists out there, and you can watch it on YouTube," he said. "You can see the exact choreography and dressing of the stage and the set and the lighting that was used. So, it's all there to be seen, which is both a great resource and also a real challenge because there's no point making a movie just to recreate what you can watch on YouTube… So for us, the challenge was only partially real, like how high was the stage? And where was the piano exactly? And how many Pepsi cups were there? That was a challenge, but a fairly straightforward one. The real challenge was how we tell a different story than you saw by watching the concert on TV. And for me at least, that was very much about putting the audience in with Freddie, right inside on the stage, almost as a fifth band member where you're, as much as possible, watching the concert from the inside out.

"While there were too many handheld cameras on the stage from the BBC performance, the broadcast was predominantly sort of more objective, traditional camera coverage," he continued. "We wanted to put the audience right in the middle of the band as if they were a part of the band to tell the emotional side of the story from the inside out. And also, of course, we are leading up to Live Aid with understanding some things that are going on in Freddie's life and in the band's life. And, in doing so, you know, we already have the advantage that there's more of an emotional resonance right from the beginning. At the end of the day, Rami Malek's sensational performance just really carried it to a level that is hard to get from the TV experience."

Because Wembley had been extensively remodeled since Live Aid, the filmmakers ended up shooting the sequences at Bovingdon Airfield outside London, where "Top Gear" is filmed. "We built an identical replica of the original stage, down to the scaffolding towers and all the banners and signs and musical equipment," Sigel told Variety. "But it wasn't that fancy or ostentatious in terms of today's stages and lighting rigs, as the whole idea of Live Aid was to raise money, not spend tons on spectacular staging. So that put more of a focus on the band and the music."

"Bohemian Rhapsody" has already become the highest-grossing musical biopic of all time, bringing in a huge $700 million at the worldwide box office. This was despite a lukewarm reaction from critics upon release. 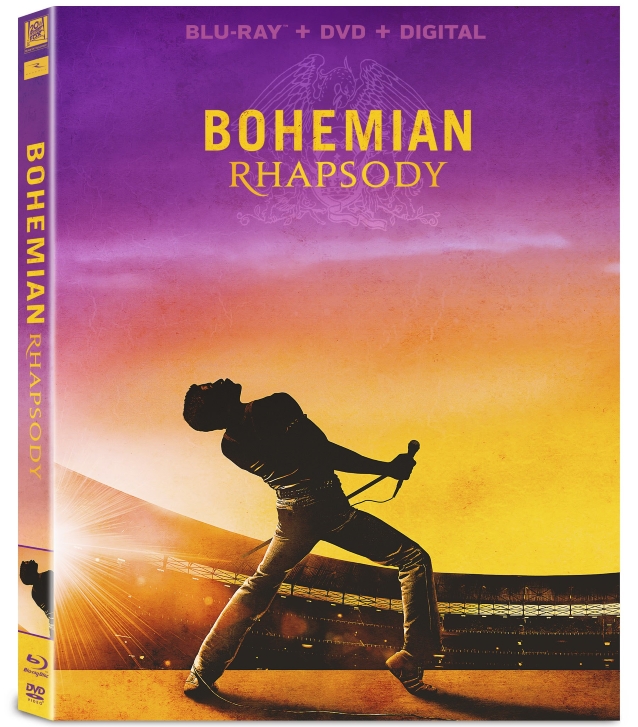