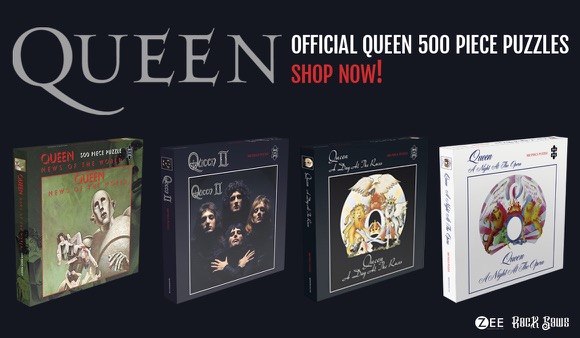 "News Of The World", "A Night At The Opera", "A Day At The Races" and "Queen II" will be made available on October 18. The iconic art of some of rock's most influential and highly regarded albums is presented in puzzle form for the first time in years.

"Queen II" is QUEEN's second studio album, released on March 3, 1974. The album combines a heavy rock sound with art rock and progressive rock elements, and has been called "a pillar of grandiose, assaultive hard rock" by the Rock And Roll Hall Of Fame. The artwork is now available as a 500-piece jigsaw puzzle printed on high-quality board.

"A Day At The Races" is the band's fifth studio album, released on December 10, 1976. It was the band's first completely self-produced album, and the first not to feature producer Roy Thomas Baker. The artwork is now available as a 500-piece jigsaw puzzle printed on high-quality board.

"A Night At The Opera" is QUEEN's fourth studio album, released on November 21, 1975. Produced by Roy Thomas Baker and QUEEN, it was reportedly the most expensive album ever recorded at the time of its release. The artwork is now available as a 500-piece jigsaw puzzle printed on high-quality board.

"News Of The World" is QUEEN's sixth studio album, released on October 28, 1977. In 1977, punk rock acts, most notably the SEX PISTOLS, sparked massive backlash against progressive rock artists such as QUEEN, to which the band responded by simplifying their symphonic rock sound and gearing towards a more spontaneous hard rock sound. The artwork is now available as a 500-piece jigsaw puzzle printed on high-quality board.