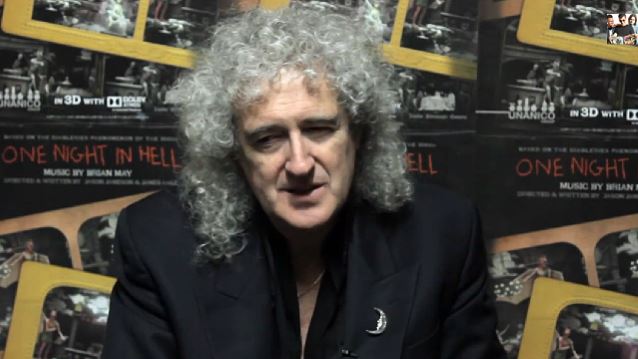 QUEEN's Brian May has commented last night's terrorist attack on an Ariana Grande concert in Manchester, England that caused the deaths of twenty-two people, several of them children. Speaking with NME, the guitarist said (see video below): "I woke up this morning and saw the news of Manchester. And the first thing I did was tweet about it, just to say… express my grief and my sympathy with the people. I mean, there were mums there that we're seeing online that didn't even know if their child was alive or dead. It's the most terrible thing. To me, it's almost impossible to imagine the kind of hatred that has to exist in someone if they would bomb children."

According to May, however, an appropriate response to such a despicable and horrendous attack is not to immediately strike back against the jihadi terrorists.

"I'm afraid I regard everything as an opportunity," he said. "Out of tragedy comes knowledge and realization. And, to me, 9/11 and all these terrible disasters are an opportunity to re-evaluate ourselves, and I think we failed to do that in 9/11, and we went on bombing people. [Prime minister] Tony Blair [and Tory leader] David Cameron still have this attitude that you can solve a violent situation by violence. I don't believe that. I believe we have to sweep all that away and start again.

"If we really think that we can solve this kind of violent behavior by being violent ourselves and being racist and reacting in that way, then we are in for the most terrible tragedy for the world now, because this is how it escalates," he continued.

"To me, you have to break the cycle of violence and you have to treat horrific events with compassion, strangely enough. And I don't mean compassion for the person who did the bombing. I mean, you have to look at the world and say, 'What part do we play in the world?' Of course we have to tighten up security."

QUEEN and "American Idol" finalist Adam Lambert are scheduled to perform at the Manchester Arena on December 9, and May said the show will go ahead as planned. "We won't cancel, because life has to go on," he said. "That's what they want, these people — they want to ruin our lives. They wanna stop us making music, dancing, being happy — of course they do — and we have to stick to what we believe in, which is that life is to be lived. So, no, we wouldn't cancel. And, of course, you have to look at security. But what you have to do much more importantly is look at the underlying causes: Why does the world hate us that much? There are reasons. And I believe we should dismantle everything that's gone before and start again."

The Manchester Arena attack was carried out by 22-year-old Salman Abedi.

Abedi, a British-born son of Libyan refugees, was a lone male suicide bomber who detonated an improvised explosive device.